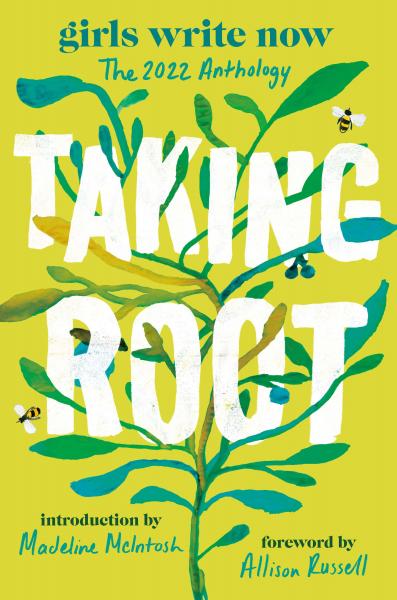 “Literature lives on as the most powerful form of expression. Girls Write Now empowers young women to declare their interpretations of the world and transcend generations to ignite minds.”
—ELAINE WELTEROTH, author of More Than Enough: Claiming Space for Who You  Are (No Matter What They Say)

“Girls Write Now is about supporting and mentoring young women and gender-expansive youth who are passionate about writing. But it is also about beginning your career journey and beginning to understand the transformative power of the written word."
—JANE LAUDER, Executive Vice President, Enterprise Marketing & Chief Data Officer, Estée Lauder Companies and Girls Write Now Honoree

“Girls Write Now inspired me to do more than think of myself as someone who writes, but as a writer. My years as a mentee gave me the foundation to be the author I’m proud to be today.”
—JOY L. SMITH, author of Turning and Girls Write Now Mentee Alum

Every year, in partnership with Dutton, we release an anthology of writing that our mentees work on throughout the school year with their mentors. We’re thrilled to publish the 2022 Anthology on May 10th which brings together the work of female and gender expansive writers and leaders who are shaping culture, impacting businesses and creating change.

For the past two years, our young writers have weathered an adolescence shaped by an ongoing global pandemic. But a harsh climate can also produce writing of rare depth, complexity, nuance, and humor. The Girls Write Now mentees in this collection have found new ways to build community and take root. This anthology is a catalog of seeds—each young writer cultivating a shimmering, emergent voice. In short stories, personal essays, poetry, and more, students reflect on powerful topics like heartbreak, self-care, and friendship, and growth.

Featuring an introduction by Madeline McIntosh and a foreword by Allison Russell.

Madeline McIntosh has been CEO of Penguin Random House U.S. since 2018. She has worked in publishing for almost three decades, and in that time has held positions in publishing, sales, operations, and audio, and was a pioneer in the early development of online sales and in the digital transition. She serves on the Board of Directors of Poets & Writers, the nation’s largest nonprofit organization dedicated to serving creative writers, and of Sourcebooks, in which Penguin Random House is an investor. She lives in New York with her husband Chris Pavone, a writer, and their twin sons.

Allison Russell is an artist, activist, songwriter and multi-instrumentalist of extraordinary power, talent and grace. A founding member of the acclaimed groups Our Native Daughters (with Rhiannon Giddens, Leyla McCalla and Amythyst Kiah), and Birds of Chicago (with her husband/musical partner JT Nero), the Montreal native has begun to emerge as a potent force among creative circles worldwide. On her debut solo album Outside Child (Fantasy Records, May 2021), Allison unpacks the story of her abusive childhood in searing detail in a deeply moving, unforgettable song-cycle of courage, hope and love. Outside Child is a powerful and warm statement of hope and resilience—asserted from a place of healing, of motherhood, of partnership—and from a new home made in Nashville.