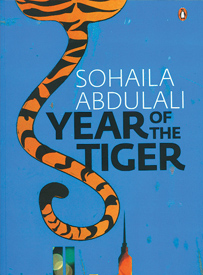 It’s the year of the tiger; anything can happen.

The Year of the Tiger is a Manhattan novel with occasional excursions to India. It is about identity and work, unexpected love, and finding your own place.

New York in the 1990s is rich, unmolested, full of hubris and joy. Zara Hussain—young, successful Wall Street trader—lives in the East Village with her twin Kabir, a free spirit and musician, and their older sister Salma, a scientist who is looking for an acceptable husband. The story begins with a crisis in Immigration at JFK airport, and ends with a meeting in Amsterdam. As the year progresses, Zara is involved in a snowballing financial scandal; Kabir is faced with the unfamiliar joys of responsibility; and Salma has found a possible and dangerous love. Along the way we meet a motley bunch—family friend Sam, obsessed with tigers; Benny, a mentally ill man in desperate search of beauty; Rick, who wants to sail the seven seas; and the moon as it makes sudden appearances.

The novel takes place in the heady beginning of the century, before 9/11, and it represents Wall Street during its mad moment of excess and glitter.

Sohaila Abdulali was born in Bombay, India. She did her schooling in India, and moved to the United States with her family when she was 15. Since then, she has lived in both countries. She has a BA from Brandeis University in Economics and Sociology, and an MA from Stanford University in Communication. Her undergraduate thesis dealt with the socio-economics of rape in India. When she was 20, she wrote an explosive article on the subject in an Indian magazine that won her notoriety for years. In 2013, she wrote an op-ed in the New York Times.