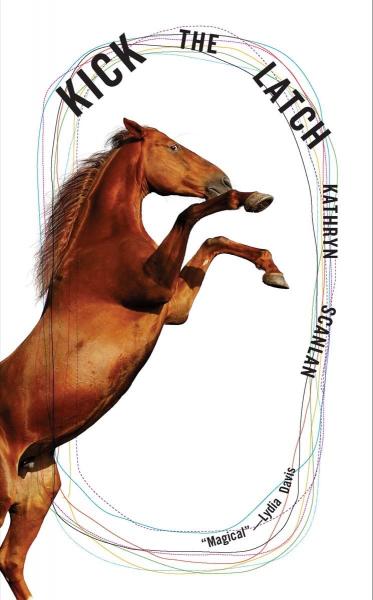 Your book purchase reserves your spot for the Seaport event on Thursday, September 29th, 2022.
Books purchased online may be picked up at the event.

About one woman’s fine, hard life at the racetrack, Kick the Latch–with its ruthless concision and artful mysteries–is lightning in a bottle

Kathryn Scanlan’s Kick the Latch vividly captures the arc of one woman’s life at the racetrack—the flat land and ramshackle backstretch; the bad feelings and friction; the winner’s circle and the racetrack bar; the fancy suits and fancy boots; and the “particular language” of “grooms, jockeys, trainers, racing secretaries, stewards, pony people, hotwalkers, everybody”—with economy and integrity.

Based on transcribed interviews with Sonia, a horse trainer, the novel investigates form and authenticity in a feat of synthesis reminiscent of Charles Reznikoff’s Testimony. As Scanlan puts it, “I wanted to preserve—amplify, exaggerate—Sonia’s idiosyncratic speech, her bluntness, her flair as a storyteller. I arrived at what you could call a composite portrait of a self.” Whittled down with a fiercely singular artistry, Kick the Latch bangs out of the starting gate and carries the reader on a careening joyride around the inside track.