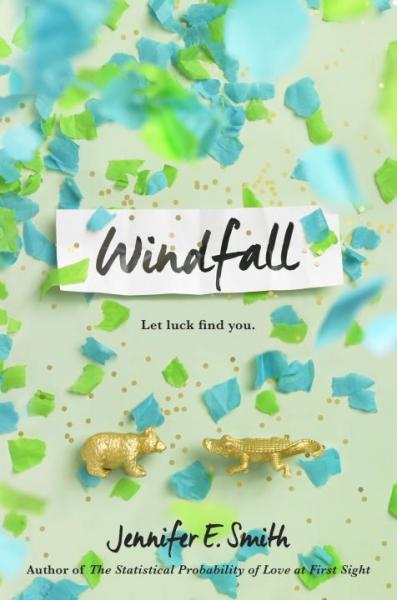 This romantic story of hope, chance, and change from the author of The Statistical Probability of Love at First Sight is one Jenny Han says is filled with all of her “favorite things,” Morgan Matson calls “something wonderful” and Stephanie Perkins says “is rich with the intensity of real love.”

Alice doesn’t believe in luck—at least, not the good kind. But she does believe in love, and for some time now, she’s been pining for her best friend, Teddy. On his eighteenth birthday—just when it seems they might be on the brink of something—she buys him a lottery ticket on a lark. To their astonishment, he wins $140 million, and in an instant, everything changes.

At first, it seems like a dream come true, especially since the two of them are no strangers to misfortune. As a kid, Alice won the worst kind of lottery possible when her parents died just over a year apart from each other. And Teddy’s father abandoned his family not long after that, leaving them to grapple with his gambling debts. Through it all, Teddy and Alice have leaned on each other. But now, as they negotiate the ripple effects of Teddy’s newfound wealth, a gulf opens between them. And soon, the money starts to feel like more of a curse than a windfall.

As they try to find their way back to each other, Alice learns more about herself than she ever could have imagined…and about the unexpected ways in which luck and love sometimes intersect.

“Windfall is about all of my favorite things—a girl’s first big love, her first big loss, and—her first big luck.”
—Jenny Han, New York Times bestselling author of To All the Boys I’ve Loved Before

“Windfall is perfectly named; reading it, I felt like I had suddenly found something wonderful. It’s a story about love, and luck, and the way our lives can change in an instant. I laughed and cried and bought a lottery ticket the very next day.”
—Morgan Matson, New York Times bestselling author of The Unexpected Everything

“Windfall is rich with the intensity of real love— in all its heartache and hope.”
— Stephanie Perkins, New York Times bestselling author of Isla and the Happily Ever After

Jennifer E. Smith is the author of seven novels for young adults, including The Statistical Probability of Love at First Sight. She earned a master’s degree in creative writing from the University of St. Andrews in Scotland, and her work has been translated into thirty-three languages. She lives in New York City. Follow her on Twitter at @JenESmith or visit her at jenniferesmith.com.