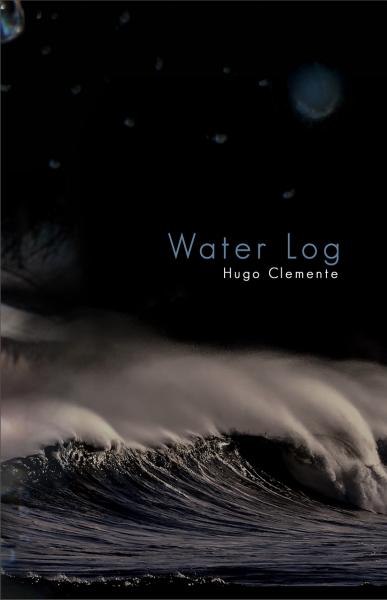 Water Log, by Hugo Clemente. Translated from the Spanish by Peter Kahn.

Water Log is a book of trajectories: stories liquidly knit around the characters of an island that are trying to keep
their sense of belonging through the practice of surf, love, sex and friendship. With a felt debt to Rock’n Roll,
Big Kahuna, Julio Cortázar, and the art of destructotherapy, Clemente’s Log is a rebellious splash of poetic images
and sensations that will leave the reader happily refreshed and eroticized.
Marta del Pozo, University of Massachusetts- Dartmouth

Water Log is a love story and a travel narrative always in perfect tension between departure and arrival. It is a novel
that begins anew with every story, and with the same sense of agility and dare of his character, it always comes back
home to a place that is different and the same. Clemente’s character is the Robert Louis Stevenson who travels by
donkey to show how the best part of a trip is how well it is told and in the process he reconstructs the familiar as
new. A micronarrative in the tradition of Lydia Davis, this original and engaging novel makes each of these stories
a bridge that connects land and sea, body and mind, and between each of them Clemente creates spaces for us to
become the best readers we can be.
Ernesto Livon-Grosman. Director of Latin American Studies
(Dept. of Romance Languages and Literatures) Boston College

Hugo Clemente’s ebullient, entrancing, raw, linguistically sensuous Water Log is to be savored in the immediacy of
every line. The strength of the language rivals that of the waves that denude an adventurous young man in search
of life, love, and meaning. This well executed novel, which showcases the Spanish avant-garde, leaves the reader
foaming at the mouth.
Jorge Armenteros, author of The Roar of the River

With a degree as a social psychologist, Hugo Clemente has been teaching Spanish at several universities in Boston
since 2015. He coordinated the Canarian School of Literary Creation (2013-2015), but also has worked as a therapist
at a methadone program, a surf and snowboard instructor and as a Dj among others. He has been teaching Creative
Writing Workshops in different Spanish cities as well as in New York, Boston and Stamsund (Norway). He was finalist
at LuchaLibro (First Literary Improvisation Championship held in Spain, 2012) and has also participated in other
collections of stories: PervertiDos (Editorial Traspiés, Granada, 2014), Ménades: an invitation to euphoria (La Piscina
Editorial-Keroxen, Tenerife, 2015) and has scripted for theater and cinema. His last documentary, The Blinking Island
(2016), has been selected in the official section in different festivals.

Antonio Ochoa was born in Mexico City in 1974. He has published two books of poems in Spanish (pulsos and El toro de Hiroshima), and his poems have appeared in journals in Spain, Mexico, Brazil, Peru and the US. His essays have appeared in different academic and nonacademic journals. He is also edited the Selected Poems and Selected Essays of Eduardo Milán both published by Shearsman in England.