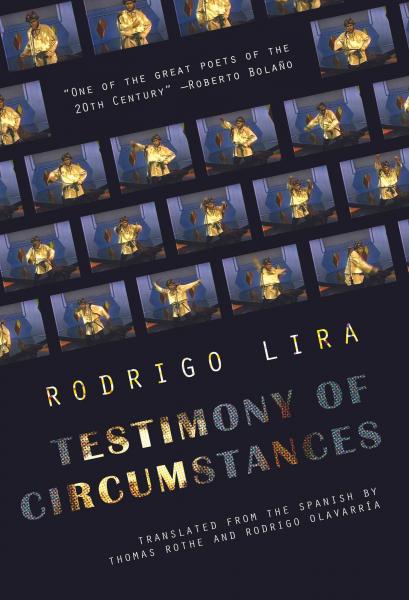 “One of the great poets of the
20th Century” —Roberto Bolaño

Translated from the Spanish by Thomas Rothe and Rodrigo Olavarría

For international deliveries, we will send you a request for payment of additional shipping costs.

“The true heir of Nicanor Parra and Enrique Lihn’s protégé, Rodrigo Lira is still considered a cult author in Chile. Halfway between the figure of the madman and the genius, halfway between the myth and the legend, Lira wrote poems that were authentic, weird and precious gems. Owner of a unique style, combining irony, intertextuality, and a sharp sense of humor, Lira was an absolute underground poet, whose work was circulated by hand in thousands of Xerox copies that flooded the most notorious university campuses in Santiago de Chile during Pinochet’s dictatorship. Now, for the very first time, his poems are available in English thanks to the bold, delicate and meticulous translation of Rodrigo Olavarría (the only authorized voice of Allen Ginsberg in Spanish) and Thomas Rothe (translator of Jaime Huenún’s Fanon City Meu). I don’t think there is a way to fully understand contemporary Chilean poetry without having read Rodrigo Lira’s exquisite and extravagant poems.”—Carlos Soto-Román

"Rodrigo Lira’s elegance, his disdain, make him off limits for any publisher. The cowardly don’t publish the brave."—Roberto Bolaño

Rodrigo Lira was born in Santiago in 1949. He gained notoriety during the seventies for his dramatic public readings and eccentric parodies of many established Chilean poets. Tormented by a diagnosis of schizophrenia as well as social marginalization, he committed suicide in 1981, on his thirty-second birthday. After his death and the posthumous publication of his first collection of poems, Proyecto de obras completas, interest in Lira’s poetry and life grew exponentially into a cult following that has influenced many younger generations of Chilean poets and writers. Combining erudite literary knowledge, intense language, and dark burlesque humor, Lira’s work is often compared to contemporaries Nicanor Parra and Enrique Lihn. Roberto Bolaño described him as “one of the last poets of Latin America.”

Charlotte Whittle’s translations and writing have appeared in The Literary Review, Los Angeles Times, Guernica, Electric Literature, BOMB, Northwest Review of Books,and elsewhere. ​Her translation of Norah Lange's People in the Room is published by And Other Stories, and her translation of Jorge Comensal's The Mutations is forthcoming from FSG. She lives in New York and is an editor at Cardboard House Press.