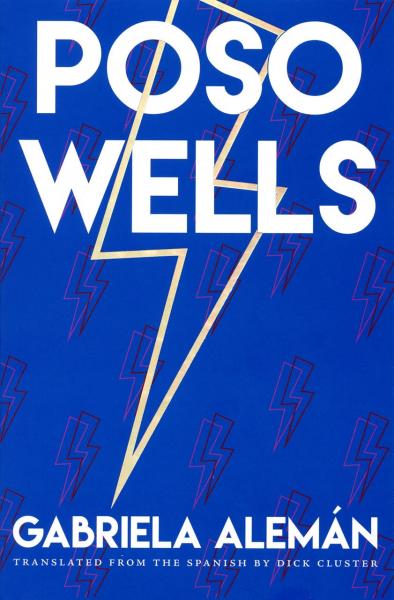 "Poso Wells is ironic, audacious, and fierce. But what is it, exactly? A satire? A scifi novel? A political detective yarn? Or the purest reality of contemporary Latin America. It's unclassifiable––as all great books are."––Samanta Schweblin, author of Fever Dream

"Poso Wells is brilliant, audacious, doubtlessly playful and at the same time so dark and bitter. A truly unforgettable book."––Alejandro Zambra, author of Multiple Choice

"The story is a condemnation not only of the corrupt businessmen and the criminal gangs that rule Poso Wells but also of the violence against women that plagues Latin America's real slums."––The New Yorker

In the squalid settlement of Poso Wells, women have been regularly disappearing, but the authorities have shown little interest. When the leading presidential candidate comes to town, he and his entourage are electrocuted in a macabre accident witnessed by a throng of astonished spectators. The sole survivor—next in line for the presidency—inexplicably disappears from sight.

Gustavo Varas, a principled journalist, picks up the trail, which leads him into a violent, lawless underworld. Bella Altamirano, a fearless local, is on her own crusade to pierce the settlement's code of silence, ignoring repeated death threats. It turns out that the disappearance of the candidate and those of the women are intimately connected, and not just to a local crime wave, but to a multinational magnate's plan to plunder the country's cloud forest preserve.

"By expertly weaving multiple narratives around the figure of Vinueza, the hapless (but wealthy!) presidential candidate who resembles so many corrupt (but wealthy!) presidential candidates in the modern history of Ecuador, Gabriela Alemán depicts with verve and humor the horrors and absurdities of a society intent on perpetuating itself."––Mauro Javier Cardenas, author of The Revolutionaries Try Again

"Gabriela Alemán has a rhythm worth watching . . . she does something unexpected, things fly apart, she leaps into the void, and you think, 'there's no way she can pull this off'––but no, everything fits together, falls into place, flows, and the story goes on."––Pedro Mairal, author of The Missing Year of Juan Salvatierra

"Through scalding wit and straight-faced parody this no-holds-barred absurdist adventure that seems more a movie than a book will have you laughing till you cry as the cruelty of its South American reality sinks in. Imagine a mix of Hunter S. Thompson and Gabriel García Márquez. A small masterpiece."––Michael Taussig, author of Beauty and the Beast

"This compulsively readable book is Gabriela Alemán's debut as a novelist in the English-language. Sparklingly original, full of dry wit, and deliciously suspenseful, Poso Wells could well earn Gabriela Alemán a cult following."––Jon Lee Anderson, author of Che Guevara: A Revolutionary Life, Guerrillas: Journeys in the Insurgent World, and The Fall of Baghdad

"Poso Wells explores the dichotomy between the new and old worlds of Ecuador through an exciting noir about missing women, corrupt politicians, and a journalist's attempt to unravel the secrets of the infinitely labyrinthine cityscape of Poso Wells. This is an exciting debut translation of a celebrated Ecuadorian author, and one that should lead to more translations of her work."––Ely Watson, A Room of One's Own Bookstore (Madison, WI)

"Poso Wells is a rare achievement in which a reader comes out the other end wanting to start again. It is a bold and clever tale with a unique voice, and it is poised to have a longstanding impression on readers for years to come."––Rebecca George, Volumes Bookcafe (Chicago, IL)

"Thriller and farce, Poso Wells is a magical realist sci-fi, a fierce and biting social allegory by turns hilarious and tragic, cynical and hopeful . . . this is a twenty-first-century cautionary tale of the war between humanity and avarice . . ."––Maria Agui Carter, director of Culture Shock and Rebel

"Gabriela Alemán's Poso Wells drops the reader, as if dangling from a helicopter's ladder, into a riveting page-turner set in coastal Ecuador. Forces of global capitalism want to mine all that is profitable from the earth, no matter the consequences. By the end we're not sure if Jacob's ladder leads to heaven or hell. The upshot of Alemán's brilliant novel, however: for every rapacious action, there is an equal, opposite, and tenacious resistance."––Mauricio Kilwein Guevara, author of Autobiography of So-and-So: Poems in Prose

"Poso Wells is an intriguing name for a thrilling novel of politics, environmental destruction and wildly imaginative occurrences that slide right to the edge of reality. The landscape includes the threatened rape of a cloud forest, a collection of fantastical blind heroes, and a presidential candidate who pees himself to death on stage. The English translation is fast and clear as the story rolls towards its ending on a steaming volcano. The first English translation of noted Brazilian-Ecuadorian novelist, Gabriela Alemán. I hope that many more follow."––Stephen Williams, contributor to the New York Times, GQ, Newsweek