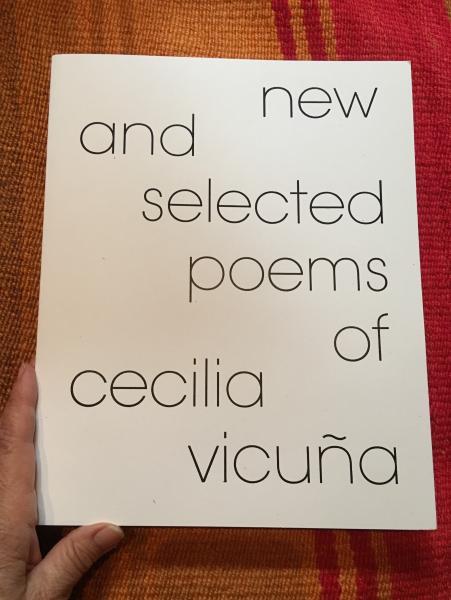 Cecilia Vicuña has embodied a life of political and social activism through poetry, visual art, film and performance. New and Selected Poems of Cecilia Vicuña is a telling of old cultures, modern nation states and lives in exile. Rodrigo Toscano calls Vicuña’s poetry “the outer out, beyond nation states, passed ‘inter state’ affairs, in other words, close in, as close as we get to our fair planet’s sources, and to each other.” In this bilingual collection, Vicuña and her translator, Rose Alcalá, are artist witnesses to a natural world that is a storehouse of sacred words, seeds, threads, and songs. Present everywhere, they are sources for a rebalancing in human relationships and for new forms of grace and healing. In Vicuña’s vision, art is life and intimacy with it is transformative.

Cecilia Vicuña is a poet, artist, filmmaker, and activist who lives and works in Chile and New York. Born and raised in Santiago de Chile, she has been in exile since the military coup in the early seventies. Combining ritual and assemblage, she creates multidimensional, ephemeral, participatory, site-specific works and performance installations which she calls "lo precario" (the precarious), a bridge between art and life, the ancestral and the avant-garde. In Chile, she founded the legendary Tribu-NO in 1967, a group that created anonymous poetic actions. In 1974, exiled in London, she co-founded Artists for Democracy to oppose dictatorships in the Third World.

Vicuña is the author of twenty-two poetry and art books, including: About to Happen (Siglio, 2017); Read Thread: The Story of the Red Thread (Sternberg Press, 2017); and AMAzone Palabrarmas (Neubauer Collegium, University of Chicago, 2018). In 2009, she co-edited The Oxford Book of Latin American Poetry: 500 years of Latin American Poetry (Oxford University Press, 2009).

Cecilia Vicuña's awards include Messenger Lecturer at Cornell University (2015), an honor bestowed on authors who contribute to the "evolution of civilization for the special purpose of raising the moral standard of our social and political life" and the Sherry Poet Residence awarded by the Neubauer Collegium at the University of Chicago (2018).