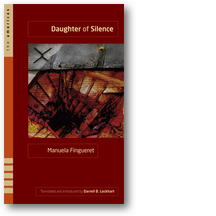 Translated by Darrell B. Lockhart

Silence is a tradition among the women of Rita’s family, so it is no wonder that she must interpret for herself what her mother has left unsaid about the horrors of the Terezin concentration camp. But Rita faces a silence of her own: a Peronist militant in 1980s Argentina, she has been incarcerated and abused in Buenos Aires’s infamous Escuela de Mecánica de la Armada (ESMA) detention center. In an imagined dialogue between mother and daughter, Rita recreates Tinkeleh’s unarticulated story, interweaving it with memories of her own childhood.

Breaking with the tradition of women as silent observers, Rita speaks not only for the nameless victims who have disappeared under Argentina’s military dictatorship but those of the Holocaust. Fingueret’s trenchant novel of survival transforms silence into a cry for justice that cannot be stifled.

In a story that blurs the lines between the Shoah and one of Latin America’s bloodiest dictatorships, Fingueret probes the limits of representation. Exploring the themes of exile, violence, and national identity, she exposes an uncanny horrific resemblance. The experience of the Holocaust is repeated some thirty years later—not in Germany or in Poland, but in Buenos Aires. —Alejandro Meter, University of San Diego

A formidable novel . . . unique in Argentine fiction for the way in which it melds the topics of Jewish history and identity with the recent political past of Argentina. —David William Foster, author of Violence in Argentine Literature: Cultural Responses to Tyranny

The novel weaves a meditation on violence, prejudice, and torture with a celebration of the capacity to triumph over them. Its tone is intimate but its reach is broad. —Alicia Borinsky, author of One Way Tickets: Writers and the Culture of Exile


Argentine author Manuela Fingueret is a storyteller, poet, journalist, essayist, and editor. She lives in Buenos Aires. www.manuelafingueret.com.ar Darrell B. Lockhart is chair of the departments of Spanish and Portuguese at the University of Nevada, Reno.