McNally Jackson and Toon Books are thrilled to celebrate the launch of Wildflowers by the phenomenal author and artist Liniers. Hosted by Yvonne Brooks.

Wildflowers is a celebration of the magical bonds that unite children. When her two big sisters embark on an adventure to explore a mysterious island, the youngest one doesn't want to be left behind. What shines through from this funny story's scary beginning ("There was a terrible plane crash"), to its sweet and satisfying ending, is Linier's admiration for the imaginative powers of childhood.

Born in Argentina in 1973, Liniers began his artistic career when he realized he wasn't cut out for law school and started making fanzines for friends. Since 2002, when his daily comic strip Macanudo began appearing in La Nación, Argentina's most widely read newspaper, Liniers has become an international comics star, with many New Yorker covers to his name, among other accolades. Macanudo is published throughout the world, and Liniers' social media reaches nearly a million followers. Liniers is also the creator of wonderful children's books, two of which are about one of the greatest characters in Macanudo: the wry, philosophical girl, Henrietta. Liniers's U.S. debut, The Big Wet Balloon, was selected as one of Parents Magazine's Top Ten, and his second book, Good Night, Planet, was the winner of the Eisner Award for Best Comics for Beginning Readers. This third book, Wildflowers, completes the set of the author's ode to his three daughters. Originally from Buenos Aires, Argentina, the family is now happily inhabiting the mysterious jungles of Vermont. 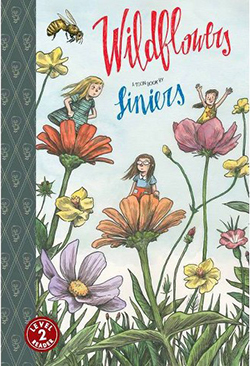