We are delighted to be hosting Nathan Hale for the launch of his newest addition to the Hazardous Tales graphic novel series, Lafayette. If you are unable to attend the in-store event you can order a signed copy of the book from us via this page. 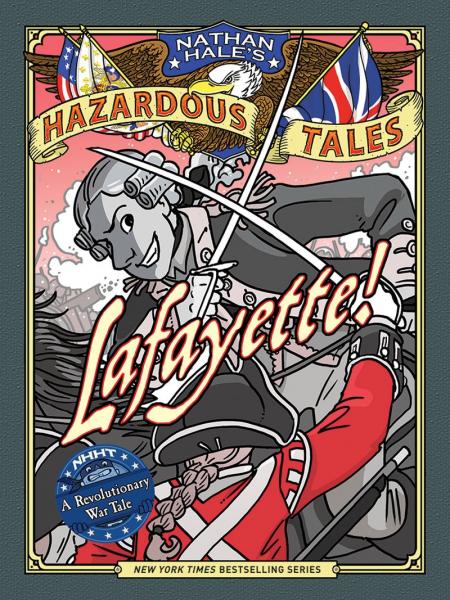 The eighth book in the bestselling series tells the story of Lafayette, the Frenchman who helped save the American Revolution

Gilbert du Motier became the Marquis de Lafayette at a young age, but he was not satisfied with the comforts of French nobility—he wanted adventure!

A captain at eighteen and a major general by nineteen, he was eager to prove himself in battle. When he heard about the Revolution going on in America, he went overseas and fought alongside Alexander Hamilton and George Washington for America’s independence. Nathan Hale’s Hazardous Tales are graphic novels that tell the thrilling, shocking, gruesome, and TRUE stories of American history. Read them all—if you dare!

Nathan Hale is the #1 New York Times bestselling author and illustrator of the Nathan Hale’s Hazardous Tales series, which includes One Dead Spy; Donner Dinner Party; Treaties, Trenches, Mud and Blood; Big Bad Ironclad!; Alamo All-Stars; and The Underground Abductor, one of which earned a place on the Texas Bluebonnet Award Master List. He also illustrated the graphic novel Rapunzel’s Revenge, which was a TODAY show “Al’s Book Club for Kids” selection, an ALA-ALSC Notable Children’s Book, and a YALSA Great Graphic Novel for Teens, as well as the recipient of three starred reviews. Nathan lives in Orem, Utah. www.hazardoustales.com.