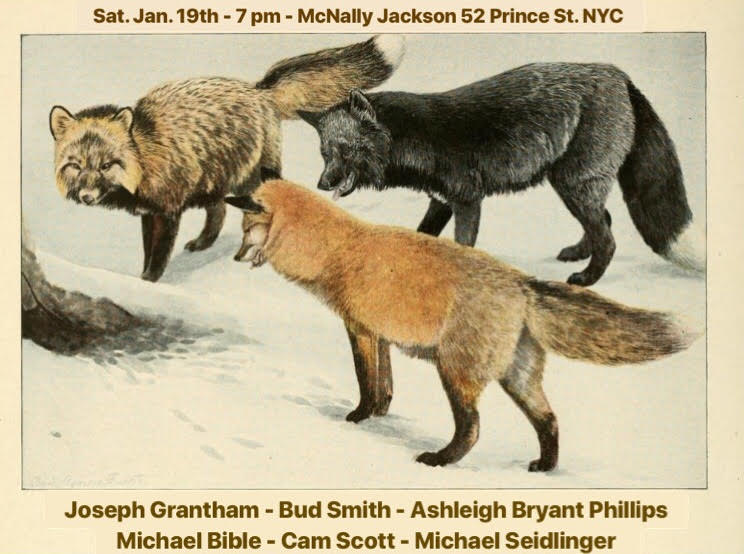 Joseph Grantham is the author of TOM SAWYER (CCM Press, 2018), which Dennis Cooper called one of his favorite books of 2018. He runs Disorder Press with his sister and lives in America.

Ashleigh Bryant Phillips is from Woodland, North Carolina. She hasn't written a book. Talk to her after the reading.

Bud Smith lives in Jersey City and works construction. He is the author of Teenager (Tyrant Books, 2019) and WORK (CCM Press, 2017), among others.

Michael Seidlinger is a Filipino American author of a number of books including Dreams of Being, My Pet Serial Killer, and The Fun We’ve Had. He serves as Library and Academic Marketing Manager at Melville House, Editor-at-Large for Electric Literature, and is a member of The Accomplices. He lives in Brooklyn.

Michael Bible is originally from North Carolina. He is the author of Empire of Light (Melville House, 2018) and Sophia (Melville House, 2015). His work has appeared in the Oxford American, The Paris Review Daily, Al-Jazeera America, ESPN The Magazine, and New York Tyrant Magazine. He lives in New York.

Cam Scott is a poet, critic, and improvising non-musician from Winnipeg, Canada, Treaty One territory. His suite of visual poems, WRESTLERS, was published by Greying Ghost in 2017.