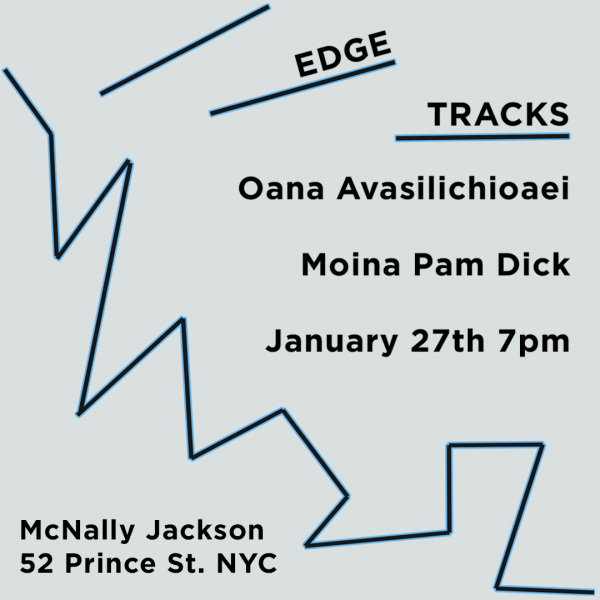 Eight Track is a transliterary exploration of traces. Sound recordings, surveillance cameras, desert geoglyphs, drone operators, refugee interviews, animal imprints, and audio signals manifest moments of inspired wonder, systems of power, slippages, debris. In “the great era of seeing” when the boundary between tracking agent and monitored subject is worn thin by politics and commerce, Eight Track assembles a set of discordant melodies, transcriptions, and images in a struggle to hold on to agency and awe. This is ultimately a book of relations—of each of us to each other, to other life forms, to environments, to the animal vitality we share.

Oana Avasilichioaei interweaves poetry, translation, photography, sound, and performance to explore an expanded idea of language, historical structures, and borders. Her six collections of poetry and poetry hybrids include We, Beasts (Wolsak & Wynn, 2012, A. M. Klein Prize for Poetry), Limbinal (Talonbooks, 2015) and Eight Track (Talonbooks, 2019). She has also translated eight books of poetry and prose from French and Romanian, including Bertrand Laverdure’s Readopolis (Book*hug 2017, Governor General Literary Award) and Catherine Lalonde’s The Faerie Devouring (Book*hug 2018, QWF’s Cole Foundation Prize for Translation). Avasilichioaei is based in Montreal and can be found at www.oanalab.com.

In a transposition of 5th-century St. Mary of Egypt’s harlot-turned-desert-ascetic vita to a contemporary setting, Moira of Edges, Moira the Tart reimagines hermitry, penitence and ardor through the figure of artist and lay philosopher Moira (sometimes Moina) Jones. Part-hagiography, part-künstlerroman in poetic mode, Moira of Edges fractures into disclosing edge time: a limned threshold; a vibrating line; an angular meditation on form, mind, god, sex, the metaphysics of time and perception.

Moina Pam Dick (aka Misha/Gregoire/Mina Pam Dick et al.) is the author of Moira of Edges, Moira the Tart (OPR, 2019), this is the fugitive (Essay Press, 2016), Metaphysical Licks (Book*hug, 2014) and Delinquent (Futurepoem, 2009). Her book I am writing you from afar is forthcoming from Black Sun Lit in 2021. With Oana Avasilichioaei, she is the co-translator of Suzanne Leblanc’s The Thought House of Philippa (Book*hug, 2015). Also a visual artist and lateral philosopher, Dick lives in New York City.

ISBN: 9780578544557
Availability: This book is harder to get and may take several weeks if available. Please email info@mcnallyjackson.com with questions.
Published: Organism for Poetic Research - October 1st, 2019