The Edge of Everything with author Jeff Giles 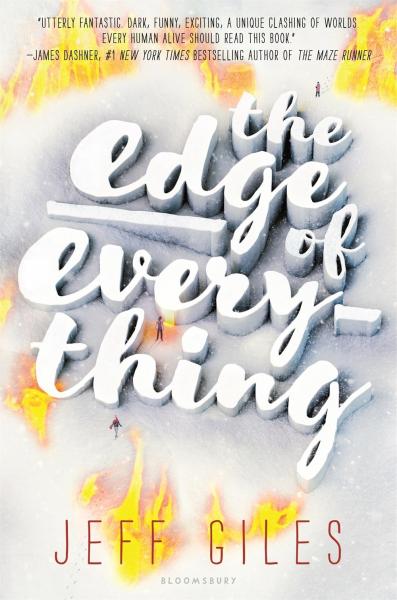 "Utterly original. Beautifully written. At turns poignant and funny, the story of Zoe and her fight to save her family and the strange young man known only as 'X' will stay with you long after you finish this extraordinary book." —Peter Jackson, Oscar-winning director of The Lord of the Rings and The Hobbit trilogies

In The Edge of Everything from Entertainment Weekly veteran Jeff Giles, it's been a rough year for seventeen-year-old Zoe. She's still reeling from her father's shocking death in a caving accident and her neighbors' mysterious disappearance from their home. Then on a terrifying, subzero, blizzardy night in Montana, she and her brother are brutally attacked in the woods—only to be rescued by a mysterious bounty hunter they call X.

But X is no ordinary bounty hunter. He is from the Lowlands, sent to claim the soul of Zoe's attacker and others like him. X is forbidden from revealing himself to anyone other than his prey, but he casts aside the Lowlands' rules for Zoe. As they learn more about their colliding worlds, they begin to question the past, their fate, and their future. But escaping the Lowlands and the ties that bind X might mean the ultimate sacrifice for them both.

Gripping and full of heart, this epic start to a new series will draw you in and the tantalizing secrets revealed will keep you reading until the darkest hours of the night.

Jeff Giles was previously the deputy managing editor of Entertainment Weekly, where he oversaw all coverage of movies and books, including the magazine’s championing of YA fiction. Jeff has also written for Rolling Stone and The New York Times Books Review. While reporting on the Lord of the Rings movies for Newsweek, Jeff was invited to be an extra in The Return of the King. He played a Rohan soldier, and—because he didn’t have a beard or mustache—they glued yak hair to his face. Jeff lives with his family in Montana. Follow him on Twitter at @MrJeffGiles.