In this edition, Cheryl talks to Helen Epstein, who helped publish her mother's memoir, Franci's War. 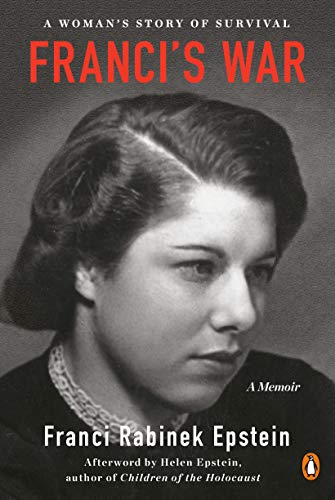 The engrossing memoir of a spirited and glamorous young fashion designer who survived World War ll, with an afterword by her daughter, Helen Epstein.

In the summer of 1942, twenty-two year-old Franci Rabinek--designated a Jew by the Nazi racial laws--arrived at Terezin, a concentration camp and ghetto forty miles north of her home in Prague. It would be the beginning of her three-year journey from Terezin to the Czech family camp in Auschwitz-Birkenau, to the slave labor camps in Hamburg, and Bergen Belsen. After liberation by the British in April 1945, she finally returned to Prague.

Franci was known in her group as the Prague dress designer who lied to Dr. Mengele at an Auschwitz selection, saying she was an electrician, an occupation that both endangered and saved her life. In this memoir, she offers her intense, candid, and sometimes funny account of those dark years, with the women prisoners in her tight-knit circle of friends.

Franci's War is the powerful testimony of one incredibly strong young woman who endured the horrors of the Holocaust and survived.

"What are the qualities of a heroine tested and shaped by history, not by myth? She must have unflinching intelligence, wit, will, and honesty in the face of near-unbearable trials. Franci Rabinek Epstein was a worldly, pleasure-loving dress designer when the Nazi’s invaded Prague; she endured and prevailed when they sent her to Terezin, Auschwitz and Bergen-Belsen. Her voice is riveting whether she's outwitting Josef Mengele, grappling with her own despair, discussing Dostoevsky with another prisoner, delousing her hair with kerosene or improvising a Cocteau monologue for a show the women inmates stage with canny defiance. She survived the worst of her times; she speaks to the best of ours." —Margo Jefferson, Pultizer-prize winning author of Negroland: A Memoir

“By bringing her mother’s vivid and engrossing memoir into the public eye, Helen Epstein has made another important contribution to our knowledge of the Holocaust in Czechoslovakia. Franci’s War is full of passion, heartache and love – shedding light on humanity’s darkest era and providing added testimony to the incredible human capacity for resilience.” —Madeleine K. Albright, Former Secretary of State

“Rarely does a Holocaust survivor have such penetrating insight as Franci Rabinek Epstein. This is a most remarkable memoir, told without self-pity, but with deep psychological astuteness about herself and the people she encountered. I didn't want it to end.” —Eva Fogelman, PhD, Pulitzer Prize nominated author of Conscience and Courage: Rescuers of Jews During the Holocaust

"An incredible narrative, so finely detailed and distinctive, and a wholly consuming read. I gained a totally new insight into the traumas of the Holocaust and couldn’t put it down. Franci definitely had the writer in her, not to mention astonishing resilience and resourcefulness." —Susannah Sirkin, Director of Policy, Physicians for Human Rights

“Franci’s War is a riveting account of how a young, spunky fashion designer in Prague survived the Holocaust, written with remarkable clarity, candor, and intelligence. A page-turning tale that makes for essential reading for today’s world. Helen Epstein provides a fascinating afterword and endnotes to her mother’s story, resulting in a profound meditation on a mother-daughter relationship formed by love and trauma. A deeply moving, extraordinary collaboration between mother and daughter in telling the story of their lives.” —Helen Fremont, national bestselling author of After Long Silence and The Escape Artist

“Franci’s War is a compelling and candid memoir. She spares no one, least of all herself from her observations and impressive understanding of life within the concentration and death camps and beyond. A brave, timeless, important work.” —Michael Berenbaum, Professor, American Jewish University

Franci Rabinek Epstein was born into a privileged family in Prague, Czechoslovakia in 1920 and educated at the Ecole Francaise, Lycee de Prague, and the Deutsches Staatsrealgymnasium before dropping out to apprentice in her mother's haute-couture Salon. At 18, Franci became the owner of the Salon. In 1940 she married Joe Solar. She regarded the Nazi concentration camps as her university. After liberation, she returned to Prague and married Kurt Epstein in 1946. In 1948, after the Communist takeover of Czechoslovakia, she emigrated to New York City and established a new fashion salon on the Upper West Side. She lectured at universities on her experience during the war before dying of a brain aneurysm in 1989.

Helen Epstein is a veteran arts journalist and author or translator of ten books of non-fiction including the trilogy Children of the Holocaust, Where She Came From: A Daughter's Search for Her Mother's History; and The Long Half-Lives of Love and Trauma. Born in Prague, she grew up in New York City. Her reviews and articles have appeared in many newspapers, magazines, and websites.

Cheryl Pearl Sucher is an award winning novelist,  journalist and interviewer as well as one of McNally Jackson’s original gangsters. A recipient of a National Endowment of the Arts Fellowship in Fiction, her first novel, The Rescue of Memory, was published by Scribner; and she hopes that her second, Alive Among the Ruins, will be in print before her cousin Julia turns 90.  She lives between New Jersey and New Zealand and is the curator for our Between Two Worlds author conversation series, where she has interviewed Min Jin Lee, Sigrid Nuñez, Susan Choi and Sally Rooney, among others.