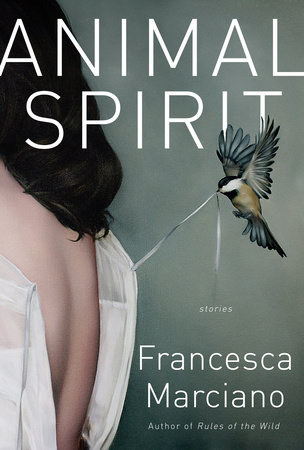 Centered in Rome but transporting us into worlds as varied and alluring as they are emotionally real, Francesca Marciano’s stories paint landscapes that are populated—vividly, hauntingly—by animals: from violent seagulls and starlings circling the evening sky in exhilarating formation to magical snakes and a tiny dog on the side of a deserted road.

In unforgettable, cinematic frames, events unfold, especially in the lives of women. An affair ends painfully at a dinner table, an actress’s past comes crashing down on her during an audition, an unhappy wife seeks respite in a historic palazzo sublet. Two starkly different couples imagine parenthood during a Greek island holiday and a young girl returns from rehab, deciding to set out anew with a traveling circus. A man in crisis draws his ex-lover deep into the New Mexico desert.

With spellbinding clarity, the six masterly stories in Animal Spirit inhabit the minds and hearts of Marciano’s characters. They chronicle deeply human moments of realization and recognition, indelible instants of irrevocable change—epiphanies sometimes sparked by our connection with animals and the primal power they show us.

“Marciano’s ability is to capture the entire arc of a character’s life in a handful of pages.”
—Michiko Kakutani, The New York Times

“I love Francesca Marciano’s work so much. Every story grabs you by the collar and doesn’t let you go until its last glorious sentence. Each one reads like a short perfect novel. She is brilliant. Please read this book immediately!”
—Lily King, author of Writers and Lovers

“The fates of [her] characters are shaped by the animals whose lives intersect theirs . . . Marciano is a master at making even the most seemingly banal settings seem forbiddingly foreign . . . and she excels at crafting conclusions that are both satisfying and enigmatic.”
—Margaret Quamme, Booklist

“Marciano's latest is made up of six longish stories set mostly in a vibrantly described Rome, often involving animals as pets or predators . . . [The opening story] sucks the reader in immediately . . . and has a layered structure that gives it the rich, leisurely feel of a Fellini film . . . Death’s lasting power echoes back through the stories, but Marciano’s closing lines offer hard-won hope . . . Emotionally charged issues of commitment, loyalty, and trust explored with dry yet oddly comforting European wit.”
—Kirkus Reviews (starred)

Francesca Marciano is the author of the novels Rules of the Wild, Casa Rossa, and The End of Manners, and the story collection The Other Language. She lives in Rome.

Louisa Ermelino is the author of three novels: Joey Dee Gets Wise, The Black Madonna, and The Sisters Mallone. She lives in New York City.