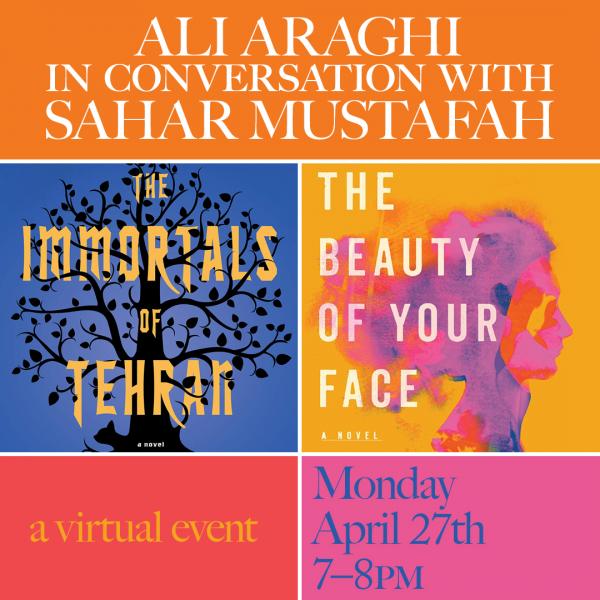 A sweeping, multi-generational epic, this stunning debut heralds the arrival of a unique new literary voice.

As a child living in his family’s apple orchard, Ahmad Torkash-Vand treasures his great-great-great-great grandfather’s every mesmerizing word. On the day of his father’s death, Ahmad listens closely as the seemingly immortal elder tells him the tale of a centuries-old family curse . . . and the boy’s own fated role in the story.

Ahmad grows up to suspect that something must be interfering with his family, as he struggles to hold them together through decades of famine, loss, and political turmoil in Iran. As the world transforms around him, each turn of Ahmad’s life is a surprise: from street brawler, to father of two unusually gifted daughters; from radical poet, to politician with a target on his back. These lives, and the many unforgettable stories alongside his, converge and catch fire at the center of the Revolution.

Exploring the brutality of history while conjuring the astonishment of magical realism, The Immortals of Tehran is a novel about the incantatory power of words and the revolutionary sparks of love, family, and poetry—set against the indifferent, relentless march of time.

Ali Araghi is an Iranian writer and translator. He earned his MA in Ancient Cultures and Languages at the University of Tehran and has translated Samuel Beckett into Persian. After completing his MFA from the University of Notre Dame, he is currently working on his PhD in Comparative Literature, International Writers Track, at Washington University. He won the 2017 Prairie Schooner Virginia Faulkner Award for Excellence in Writing and has published stories and translations in Prairie Schooner, The Fifth Wednesday Journal, Asymptote, and Hayden’s Ferry Review, among others. He lives in St. Louis.

A Palestinian American woman wrestles with faith, loss, and identity before coming face-to-face with a school shooter in this searing debut.

A uniquely American story told in powerful, evocative prose, The Beauty of Your Face navigates a country growing ever more divided. Afaf Rahman, the daughter of Palestinian immigrants, is the principal of Nurrideen School for Girls, a Muslim school in the Chicago suburbs. One morning, a shooter―radicalized by the online alt-right―attacks the school.

As Afaf listens to his terrifying progress, we are swept back through her memories: the bigotry she faced as a child, her mother’s dreams of returning to Palestine, and the devastating disappearance of her older sister that tore her family apart. Still, there is the sweetness of the music from her father’s oud, and the hope and community Afaf finally finds in Islam.

The Beauty of Your Face is a profound and poignant exploration of one woman’s life in a nation at odds with its ideals, an emotionally rich novel that encourages us to reflect on our shared humanity. If others take the time to really see us, to look into our face, they will find something indelibly familiar, something achingly beautiful gazing back.

Sahar Mustafah is the daughter of Palestinian immigrants. Stories from her prize-winning collection Code of the West (2017) have been awarded the Guild Literary Complex Prize for fiction, a Distinguished Story honor from Best American Short Stories, and three Pushcart Prize nominations, among other honors. She teaches literature and creative writing to high school students outside of Chicago.

The Immortals of Tehran (Hardcover)

The Beauty of Your Face: A Novel (Hardcover)