The Untold Stories In War: A Soldier Memoir And Victory: Join The Military (Paperback) 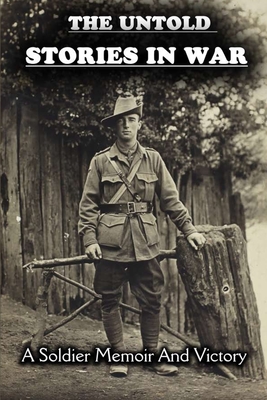 A soldier is one who fights as part of the military. A soldier can be a conscripted or volunteer enlisted person, a non-commissioned officer, or an officer. In other words, soldiers are military personnel that participates in ground, sea, or air forces, commonly known as armies, navies, and air forces, respectively.

Jason Rosman, a giant of a man standing at 5 feet 3 inches, was a low-ranking Marine in the heart of this battle; this is his story. Follow along on this adventure that takes you straight into the action in a way that only a man thrown into the depths of war at the age of eighteen could describe. Witness how combat slowly changes people and how the adversity of war brings people together.
In a book about war that isn't about war, it was the people that mattered. Coming from across the country, no better than anyone else, each person made a choice and had to live with the consequences.
In a four-year career that took Jason from Southern California to Ramadi, Iraq, Okinawa, and the Haditha Triangle, a group of young men, still considered kids to most, would learn about love, friendship, and the brotherhood that can only be forged under enemy fire.