Playing With Death: The Anecdotes Of A Tank Crew In 1990-1991 Gulf War: Ram Kangaroo Interior (Paperback) 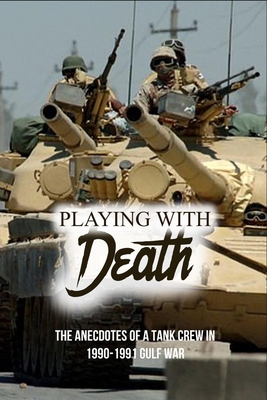 The Gulf War b] (2 August 1990 - 28 February 1991) was a war waged by coalition forces from 35 nations led by the United States against Iraq in response to Iraq's invasion and annexation of Kuwait arising from oil pricing and production disputes. It was codenamed Operation Desert Shield (2 August 1990 - 17 January 1991) for operations leading to the buildup of troops and defense of Saudi Arabia and Operation Desert Storm (17 January 1991 - 28 February 1991) in its combat phase.

This is the story of a tank crew and tank troop in a modern war, a type of "Modern Fury" of Brad Pitt fame. The Gulf War of 1990-91 was probably the last major deployment of arms by the UK on such a scale and a larger gathering of armor than the Battle of Kursk in WWII.

Review: "What I liked most about this book was how natural it was, no striving for heroics, none of the bullshit so common among war memoirs: Just good, plain down to earth stuff devoid of modern spin: - John Hollands Author of 'The Dead, the dying and the damned".