Beyond Good and Evil: Annotated (Paperback) 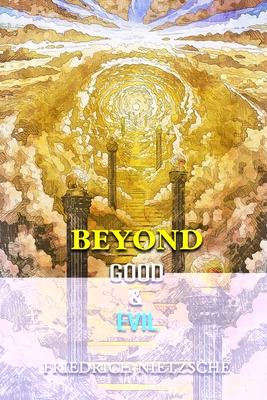 Beyond Good and Evil by Friedrich Wilhelm Nietzsche

Beyond Good and Evil is a comprehensive description of Nietzsche's mature philosophy. The book consists of 296 aphorisms, ranging in length from a few sentences to a few pages. These aphorisms are grouped thematically in nine different chapters and are crowned by a preface and a poem. While each aphorism can stand on its own, there is also a linear progression between aphorisms within chapters and from chapter to chapter. However, each aphorism presents a distinctive point of view, and even the individual chapter summaries omit much.

The preface accuses philosophers of dogmatism and the first chapter explores this claim. Every great philosophy, Nietzsche asserts, is little more than a personal confession. Philosophers construct complex systems of thought to justify their own assumptions and prejudices. If we can dig them up, we can see what these philosophers value most deeply and thus better understand their character.

Nietzsche contrasts his dogmatism with the "free spirit" who is not caught in a particular point of view. He hopes that the philosophers of the future will be characterized by such an experimental method, willing to test any hypothesis and follow any argument to its conclusion.

After a discussion about the religious spirit, which according to him is a kind of dogmatism, Nietzsche embarks on a series of epigrams, most of which highlight our strange psychological makeup. Next, consider the long history of moral systems as a set of different attempts at self-improvement. He speaks out strongly against the "herd" morality that fosters boring mediocrity in everyone. It finds such mediocrity in modern scholarship that it is too preoccupied with unearthing dry and boring facts. Nietzsche's ideal philosopher creates meaning and values and does not simply deal with empty facts.

Nietzsche asserts that there is a "rank order" according to which the spiritual strength of all people can be measured. Due to this difference between people, it would be absurd to apply a moral code to all people. Nietzsche suggests that the strongest people are marked by cruelty to themselves, according to which they mercilessly expose all their prejudices and assumptions to delve deeper into themselves. Deep down, however, everyone is prejudiced. To prove this point, Nietzsche launches an eight-page tirade against women.

He then addresses the question of nationalities and nationalism, relying on a kind of Lamarckism that considers that different nationalities or "races" inherently have certain characteristics. Among other things, Nietzsche attacks anti-Semitism, criticizes the English, and advances the concept of the "good European", rising above nationalist sentiment to find true individuality.

The final chapter presents Nietzsche's conception of "the noble" a lonely and suffering soul, who has risen so far above the common mob that he is unrecognizable and totally misunderstood by them. Close the book with a weak poem about such a noble soul sitting on top of a mountain wishing he had more friends.