Electroculture - The Application of Electricity to Seeds in Vegetable Growing (Paperback) 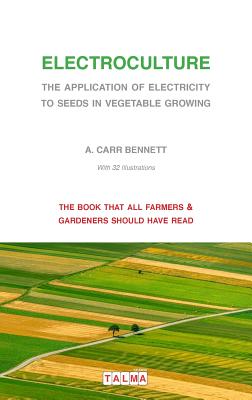 "It is claimed for the system described in this book that by its aid no back-yard is too small, no soil too poor, to grow vegetables in such quantity and of such quality as will materially lessen a family's food bill", wrote in 1921 the author in his introduction.

Indeed, after nine years' persistent experiments in the use of electricity and quick-growing methods, A. Carr Bennett developed a method which proved successful "in the stimulating of fertile vegetable seed."

It also increases the speed of germination and the number of plants that reach maturity, and accelerates maturation too: for example, white turnips reached maturity in just thirty-five days instead of the usual sixty, which allowed for a new crop to be planted.

The Bennett method is one of a number of "electroculture" techniques which almost disappeared after WW2, when agrochemicals started to replace everything and brought with them all the dramatic side effects we know today.

It works on all different sorts of plant: "In 1918, electrified seed of this description gave on an average over 30 per cent increased yield in bushels per acre; the grain produced was of a better quality, and the straw longer and stouter. This is the "larger sphere" which the writer is now contemplating. Imagine how much such an increase in wheat-yield would mean to New South Wales "

If we replace "New South Wales" with "Mankind" then everybody will understand how important this book is.

Almost a century later, we are pleased to once again be able present this information to everybody, including farmers, gardeners, agronomists and anyone concerned about food, health and environment.