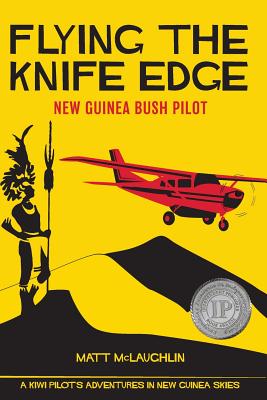 Sometimes it's not about the destination...it's about the journey.

'Flying the Knife Edge' is the story of an ordinary man experiencing extraordinary things as a pilot in Papua New Guinea in the 1990s.

After an untimely exit from the Royal New Zealand Air Force, Matt McLaughlin took a leap into the unknown, travelling to Papua New Guinea to work as a missionary pilot. He soon switched from missionary to mercenary, and over the next three and a half years, as he built up the necessary experience to chase his goal of becoming an Airline captain, his life was a rollercoaster ride of adventure, risk, near-misses, and tragedy. Matt lived on the knife edge of bush pilot ops in one of the world's most dangerous flying environments. Along the way he soaked up some fascinating local history: the country's vital role in WWII's Pacific Theatre; the disappearance of aviator Amelia Earhart; the chaos of the Bougainville civil war; the Morobe gold rush of the 1930s...

"The gap in the cloud became smaller and smaller as I descended, a shrinking tunnel twisting down the gorge. In a matter of seconds I was so low my wheels barely cleared the trees on the valley floor as I passed, and jungle-clad walls closed in on me until I was a mere wingspan from both sides of the valley. And then, in an instant, the gap was gone and I was flying blind.

In the bottom of a gorge.

With terrain on both sides rising thousands of feet above me.

The passengers started screaming, anticipating the aircraft impacting the side of the mountain. And their deaths.

I had the capacity for just one other thought: Will I hear the sound of the airframe smashing into the trees as we crash, or will I be dead before it registers?"