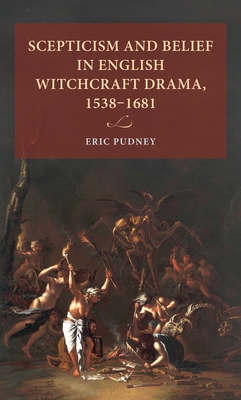 Winner of the 2019 Warburg Prize from the Royal Swedish Academy of Letters, History and Antiquities for an outstanding work of literary history

'Eric Pudney's book is a revisionary, incisive and accessible literary history of witchcraft in early modern drama that redefines both the terms and scope of the field: highly recommended.'
Marion Gibson, Professor of Renaissance and Magical Literatures, Unviersity of Exeter

This is the first major study of witches in early modern English drama to be published since the 1990s. It expands on and updates previous scholarship on the subject, situating its analysis within the frameworks of both intellectual and political history.

The book begins with the earliest extant play to feature a witch, John Bale's Three Laws. Unlike many previous works in the field, it covers the drama of the Elizabethan period and the Restoration as well as the more familiar Jacobean witch plays. The Restoration is of particular interest, as witches were much more frequently represented at this time than before - despite the decline in actual prosecutions. Throughout the study, the importance of scepticism and belief is stressed. Witchcraft was always a controversial issue, and has traditionally been seen in terms of a debate between 'sceptics' and 'believers'. This book instead argues that, while the concepts of scepticism and belief are central to an understanding of early modern witchcraft, they are more fruitfully understood not as static and mutually exclusive positions within the witchcraft debate, but as rhetorical tools used by both sides.

The book will be of interest to students and researchers of witchcraft across disciplinary boundaries, including historians, folklorists, and literary scholars.

Eric Pudney is an Affiliated Researcher at Lund University