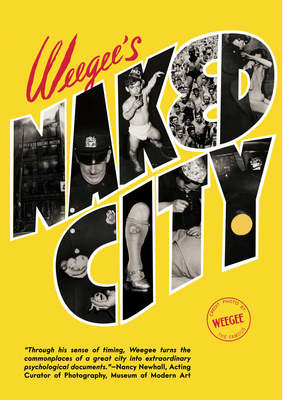 Weegee wandered the streets of 1940s New York at night looking for lovers, corpses and criminals to shoot for tabloid readers who "had to have their daily blood bath and sex potion to go with their breakfast" (as Weegee put it with characteristic flair). His images crackle with visual puns, blinding flashes and complex compositions; they display the bawdy sensationalism of the tabloids they were shot for and the stylishness of the film noir cinema that took inspiration from them.

With Naked City, his first publication, Weegee gave his images the photobook treatment. Weegee's eye for surprising juxtapositions and the minutiae of city life is in full force in the images chosen and their inventive, playful sequencing, all narrated in the photographer's own distinctive voice. Naked City is Weegee at his wisecracking best, and it is here republished in a beautifully printed new edition. Including texts by New York Magazine City Editor Christopher Bonanos and International Center of Photography Weegee specialist Christopher George, Naked City refreshes a photo classic. Weegee, born Usher Fellig (1899-1968), started working in 1935 as a freelance news photographer specializing in nighttime scenes. He lived opposite police headquarters, installed a police radio in his car and had a knack for being the first on the scene (supposedly earning his nickname for this nearly psychic tendency). In addition to selling photos to local and national publications, Weegee published them in several books, including Naked City (1945), Weegee's People (1946) and Naked Hollywood (1953).--Pat Padua "Spectrum Culture.