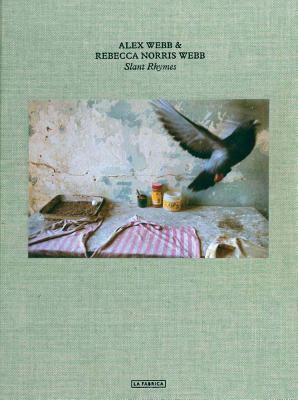 Selected from photographs taken during the Webbs' nearly 30-year relationship, this group of 80 paired photographs creates an affectionate play of visual rhymes

Slant Rhymes is a photographic conversation between two renowned authors and artists, Magnum photographer Alex Webb and poet and photographer Rebecca Norris Webb. Selected from photographs taken during the Webbs' nearly 30-year relationship (a friendship evolving into a marriage and creative partnership), this group of 80 photographs is laid out in pairs--one by Alex, one by Rebecca--to create a series of visual rhymes that talk to one another, often at a slant and in intriguing and revealing ways.

"Sometimes we find our photographic slant rhymes share a similar palette or tone or geometry," writes Alex Webb in the introduction to the book. "Other times, our paired photographs strike a similar note--often a penchant for surreal or surprising or enigmatic moments--although often in two different keys."

In this volume, the artists' photographs--many of which are published here for the first time--are interwoven with short text pieces by the Webbs. A deeply personal book, beautifully produced as an intimate clothbound edition with a tipped-on cover, Alex Webb and Rebecca Norris Webb: Slant Rhymes is an unfinished love poem, told at a slant.

Rebecca Norris Webb, originally a poet, often interweaves her text and photographs in her six books, most notably with her monograph, My Dakota--an elegy for her brother who died unexpectedly--with a solo exhibition of the work at The Cleveland Museum of Art in 2015. Her work has appeared in The New Yorker, The New York Times Magazine, Le Monde, among other publications, and is in the collections of the Museum of Fine Arts, Boston, Cleveland Museum of Art, and George Eastman Museum, Rochester, NY.Alex Webb has published 16 books, including a survey book of 30 years of color work, The Suffering of Light. He's exhibited at museums worldwide including the Whitney Museum of American Art, NY, the High Museum of Art, Atlanta, and the Museum of Fine Arts, Boston. A Magnum Photos member since 1979, his work has appeared in the New York Times Magazine, National Geographic, and other publications. He has received numerous awards including a Guggenheim Fellowship in 2007.