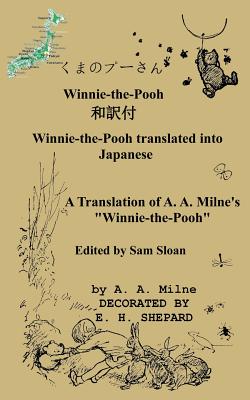 By A. A. Milne, Sam Sloan (Introduction by), E. H. Shepard (Illustrator)
Unavailable, our apologies.
Sorry, We Can Not Obtain this Book at This Time

Winnie-the-Pooh is the most popular children's book in the world. Japanese is a language read and spoken by 130 million people. Almost all of them are in Japan.

The Japanese writing system uses four different systems, all at once. Hiragana (平仮名, ひらがな) is a Japanese syllabary, one component of the Japanese Writing system, along with katakana and kanji. This translation uses all three writing systems, sometimes in the same sentence. You can find Hiragana, Katakana and Kanji right next to each other.

One purpose of this book is to help Japanese speakers learn English and to help English speakers learn Japanese. To have a translation as close as possible to the original is the most useful.

This translation into Japanese is part of project to translate Winnie-the-Pooh into other languages. The idea is children need to learn to read at an early age and the best way to teach them to read is to provide reading materials that they find interesting. Children around the world laugh when they see Winnie-the-Pooh saying and doing silly things. Since Winnie-the-Pooh is the most popular children's book world-wide, translating this book into the different languages of the world will be conducive to teaching children to read in those languages.

We are not translating the entire book. We are only translating Chapter 2, which is the most interesting, most popular and shortest chapter.

We would like to hope that this little bear, Winnie-the-Pooh, can bring peace and unity to the languages of the region.