The Tale of Genji: The Authentic First Translation of the World's Earliest Novel (Tuttle Classics) (Paperback) 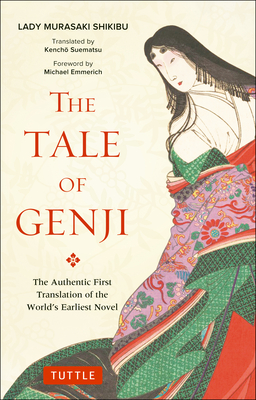 The most famous work of Japanese literature and the world's first novel--written a thousand years ago and one of the enduring classics of world literature. Written centuries before the time of Shakespeare and even Chaucer, The Tale of Genji marks the birth of the novel--and after more than a millennium, this seminal work continues to enchant readers throughout the world. Lady Murasaki Shikibu and her tale's hero, Prince Genji, have had an unmatched influence on Japanese culture. Prince Genji manifests what was to become an image of the ideal Heian era courtier; gentle and passionate. Genji is also a master poet, dancer, musician and painter. The Tale of Genji follows Prince Genji through his many loves and varied passions. This book has influenced not only generations of courtiers and samurai of the distant past, but artists and painters even in modern times--episodes in the tale have been incorporated into the design of kimonos and handicrafts, and the four-line poems called waka which dance throughout this work have earned it a place as a classic text in the study of poetry. This version by Kencho Suematsu was the first-ever translation in English. Condensed, it's a quarter length of the unabridged text, making it perfect for readers with limited time. Not speaking is the wiser part,
And words are sometimes vain,
But to completely close the heart
In silence, gives me pain. --Prince Genji, in The Tale of Genji

Lady Murasaki Shikibu, born in the year 978, was a member of the famed Fujiwara clan--one of the most influential families of the Heian period. Her literary ability quickly won her a place in the entourage of the Empress Akiko, whose court valued the rare woman who was a master of writing. After the death of her husband, Murasaki Shikibu immersed herself in Buddhism, and the religion's influences permeate her writing. Michael Emmerich is Associate Professor of Japanese literature at the University of California, Los Angeles. He is the author of The Tale of Genji: Translation, Canonization, and World Literature, the editor of Read Real Japanese Fiction: Short Stories by Contemporary Writers and New Penguin Parallel Texts: Short Stories in Japanese, and the translation of numerous works of premodern, modern and contemporary Japanese Literature. In 2010, he was awarded the Japan-U.S. Friendship Commission Prize for the Translation of Japanese Literature for his translation of Kawakami Hiromi's novel Manazuru.