The Silent University: Towards a Transversal Pedagogy (Paperback) 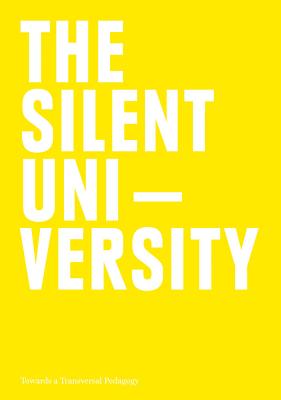 The Silent University, initiated by artist Ahmet g t in 2012, is an autonomous platform for academics who cannot share their knowledge due to their status of residence, because their degrees are not recognized or regaining access to academia is blocked for other reasons. It is a solidary school by refugees, asylum seekers and migrants who contribute to the program as lecturers, consultants and researchers.

The Silent University proposes a new institution outside of the restrictions of existing universities, migration laws and the other bureaucratic or juridical obstacles many migrants face. At the same time it mimics the idea of exiting universities, using their representational logics by developing alternative structures of pedagogy beyond border politics, race/ethnicity and normative education.

This first comprehensive publication about the Silent University introduces the initiative and contextualizes it in the wider framework of both radical pedagogy and socially engaged art projects. In addition, all current branches of the Silent University--in Amman, Athens, Hamburg, London, M lheim/Ruhr, and Stockholm--describe their very different achievements as well as their struggles and failures.

The book contextualizes this initiative within a broader picture of migration policies, critical pedagogy, artistic involvement and institutional engagement. It also hopes to be an introduction for all those who might want to get involved in the Silent University--as contributors, lecturers, students in the existing branches, or by initiating new SUs wherever they are needed: a need which is becoming urgent in more and more cities and countries all around the world.

This book is published as an edition of Impulse Theater Festival, which initiated the foundation of Silent University Ruhr in M lheim in June 2015.