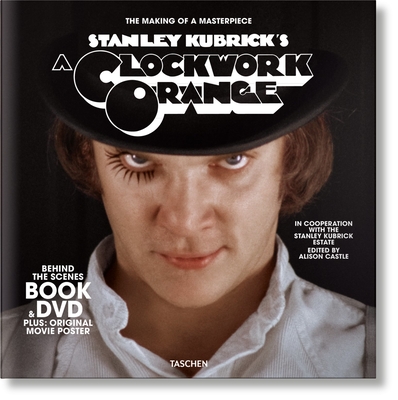 By Alison Castle (Editor)
$35.00
On Our Shelves Now - Available to Ship to Your Home

Based on the futuristic novel by Anthony Burgess, A Clockwork Orange is a masterwork of cinematic satire. When a flamboyant, Beethoven-obsessed, murderous gang leader agrees to undergo experimental violence-aversion therapy in exchange for early release from prison, he winds up "cured" of his own free will. The film's highly stylized sets, choreographed brutality, and Moog synthesizer score--conceived to heighten the effect of each scene--were so ahead of their time that, to many, they obscured the overall message. In fact, so much controversy over the violent scenes ensued that the film's notoriety became, itself, the stuff of legend.

From a contemporary perspective, what stands out above all is Kubrick's extraordinary gift for entertaining us while making us think. To quote Burgess: "Is it better for a man to have chosen evil than to have good imposed upon him?" The ethical queries so central to this visionary film are every bit as relevant today, and every bit as difficult to answer. This collection is part of the Making of a Masterpiece series, offering a behind-the-scene glimpse into cinematic milestones.This set includes:

background about the making of the film, interviews with Kubrick, and an illustrated biography and filmography

a DVD of the remastered film