A Strange Manuscript Found in a Copper Cylinder: A satiric and fantastic romance by James De Mille (Paperback) 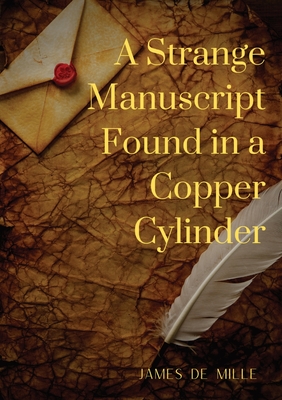 A Strange Manuscript Found in a Copper Cylinder is the most popular book by James De Mille.

It was serialized posthumously and anonymously in Harper's Weekly, and published in book form by Harper and Brothers of New York City during 1888. It was serialized subsequently in the United Kingdom and Australia, and published in book form in the United Kingdom and Canada. Later editions were published from the plates of the Harper and Brothers first edition, during the late 19th and early 20th centuries.The satiric and fantastic romance is set in an imaginary semi-tropical land in Antarctica inhabited by prehistoric monsters and a cult of death-worshipers called the Kosekin. Begun many years before it was published, it is reminiscent of Edgar Allan Poe's The Narrative of Arthur Gordon Pym of Nantucket and anticipates the exotic locale and fantasy-adventure elements of works of the "Lost World genre" such as Arthur Conan Doyle's The Lost World and Edgar Rice Burroughs' The Land That Time Forgot, as well as innumerable prehistoric world movies based loosely on these and other works. The title and locale were inspired by Edgar Allan Poe's Ms. Found in a Bottle.It was unfortunate for De Mille's reputation as a writer that this work was published after She and King Solomon's Mines. Although H. Rider Haggard's works were well known by then, the actual composition of De Mille's romance pre-dated the publication of the popular romances and his ideas were not in the least derivative from Haggard's better known works.The main story of the novel is the narrative of the adventures of Adam More, a British sailor shipwrecked on a homeward voyage from Tasmania. After passing through a subterranean tunnel of volcanic origin, he finds himself in a "lost world" of prehistoric animals, plants and people sustained by volcanic heat despite the long Antarctic night.A secondary plot of four yachtsmen who find the manuscript written by Adam More and sealed in a copper cylinder forms a frame for the central narrative. They comment on More's report, and one identifies the Kosekin language as a Semitic language, possibly derived from Hebrew.In his strange volcanic world, More also finds a well-developed human society which in the tradition of topsy-turvy worlds of folklore and satire (compare Sir Thomas More's Utopia, Erewhon by Samuel Butler, or Charlotte Perkins Gilman's Herland) has reversed the values of 19th century Western society: wealth is scorned and poverty is revered, death and darkness are preferred to life and light. Rather than accumulating wealth, the natives seek to divest themselves of it as quickly as possible. Whatever they fail to give away to wealthy people is confiscated by the government, which imposes the burden of wealth upon its unfortunate subjects at the beginning of the next year of reverse taxation as a form of punishment.