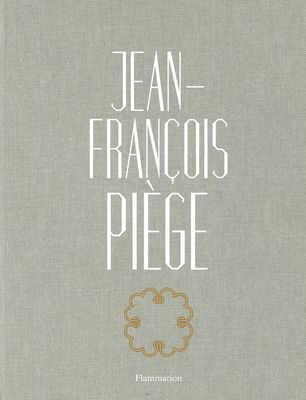 Two Michelin–starred chef Jean-François Piège divulges more than 300 recipes from his exceptional restaurant, with suggestions for combining key ingredients into inventive menus. Visitors to award-winning chef Jean-François Piège’s gastronomic restaurant—the most sought-after table in Paris—select single key ingredients from his innovative menu, which he transforms into exquisite and highly creative dishes. This approach provided the inspiration for this master-level cookbook, in which Piège presents more than 300 building-block recipes that can be combined in countless variations, inspiring the creative chef to compose original menus. Recipes include white asparagus with smoked salmon and horseradish cream, peanut crisp with aniseed garnish, line-caught pollack, black truffle scallops, spaghetti carbonara (in which the proportions of bacon and pasta are inverted), beef or chicken with morel sauce, bergamot custard, or cherry tarte tatin. Featuring a cloth binding, three paper stocks, five-color printing, and a detailed index, this lavish book from France’s culinary sensation Jean-François Piège is a perfect gift for professional and aspiring home cooks, as well as French culinary aficionados.

Jean-François Piège holds two Michelin stars and is one of the highest-profile chefs of his generation. After collaborating with Alain Ducasse, he ran the restaurant Les Ambassadeurs at the Hôtel Crillon, and opened a brasserie in 2009, his eponymous restaurant in 2010, and the Hôtel Thoumieux in 2011. He has published several books, including At the Crillon and at Home: Recipes by Jean-François Piège (2008). He judged five seasons of the French edition of Top Chef. Stéphane de Bourgies’s photographs have appeared in numerous cookbooks.

"Billed as a master-level cookbook, this clothbound beauty is definitely aimed at more ambitious home cooks . . . Inspired by the unique dining experience at his eponymous restaursant, Piege encourages mixing and matching the recipes to create original menus. And with that same spirit of freedom, he wants his readers to make his dishes their own, calling that an essential part of cooking."
-TastingTable.com

"The cliche that you can't tell a book by its cover has never been more true than in the case of this all-gray volume, whose cover hides within some of the most stunning French cuisine of a contemporary Michelin-starred master."
-JohnMariani.com