Into the Maidstone (Maidstone Chronicles #3) (Paperback) 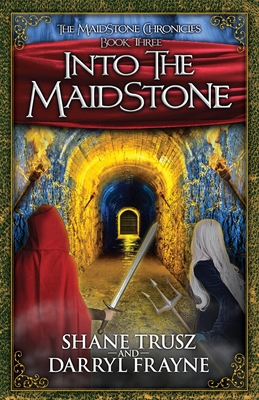 This is book number 3 in the Maidstone Chronicles series.

The Fourwinds needs a hero, but the final battle is too great for just one.

When Will and Morgan first travelled from our world to the Fourwinds, they never imagined they would become humanity's best hope for survival. They've overcome incredible odds and helped win important battles. Now, they have reunited with their friends in the Rainia Valley to stand against the Iron Dragon as his powerful contagion poisons the land.

A chance encounter exposes a weakness in their defenses, and the protectors of the Fourwinds decide to confront the enemy on his turf. The security of the last haven in the land depends upon a bold choice to venture into the one place no one wants to go: the mysterious Maidstone tower.

The journey will uncover secrets beyond anyone's imagination. It will test the strength of love and friendship. It will change everything for Will and Morgan. But it might be the only way to preserve life in the Fourwinds.

Into the Maidstone is the third book in the Maidstone Chronicles trilogy, an action-packed fantasy series for teens and young-at-heart readers. If you've followed this epic adventure so far, you'll want to read this thrilling conclusion.