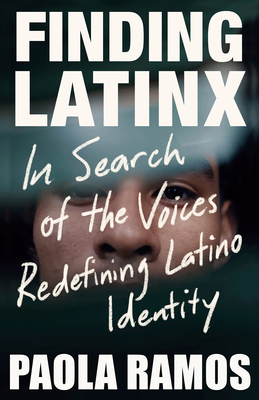 Latinos across the United States are redefining identities, pushing boundaries, and awakening politically in powerful and surprising ways. Many—Afrolatino, indigenous, Muslim, queer and undocumented, living in large cities and small towns—are voices who have been chronically overlooked in how the diverse population of almost sixty million Latinos in the U.S. has been represented. No longer.

In this empowering cross-country travelogue, journalist and activist Paola Ramos embarks on a journey to find the communities of people defining the controversial term, “Latinx.” She introduces us to the indigenous Oaxacans who rebuilt the main street in a post-industrial town in upstate New York, the “Las Poderosas” who fight for reproductive rights in Texas, the musicians in Milwaukee whose beats reassure others of their belonging, as well as drag queens, environmental activists, farmworkers, and the migrants detained at our border. Drawing on intensive field research as well as her own personal story, Ramos chronicles how “Latinx” has given rise to a sense of collectivity and solidarity among Latinos unseen in this country for decades.

Paola Ramos is a host and correspondent for VICE and VICE News, as well as a contributor to Telemundo News and MSNBC. Ramos was the deputy director of Hispanic media for Hillary Clinton’s 2016 presidential campaign and a political appointee during the Barack Obama administration, and she also served in President Obama’s 2012 reelection campaign. She’s a former fellow at Emerson Collective. Ramos received her MA in public policy from the Harvard Kennedy School and her BA from Barnard College, Columbia University. She lives in Brooklyn.

"A journey towards the long-overdue representation of Latinx people through the term "Latinx," inspiring a collective sense of identity and solidarity."
—Marie Claire

"Paola Ramos explores Latinx identity and makes a case for why it is important that we as a community find a term that evolves with us as a community. She believes and demonstrates in her book how the term 'Latinx' might be the best term that captures our wide spectrum of stories and histories."
—Popsugar

"Crucial. . . . A long-overdue examination of identity and belonging while living as Latinx in the US. From farm workers to drag queens, from Oaxacan to Muslim, the people Ramos highlights illustrate the complexity, diversity and beauty of Latin@s from coast to coast."
—Ms. Magazine

"Paola Ramos is the voice for the millennial and younger Latinx generation, and Finding Latinx proves just that. . . . Ramos writes with candor and empathy. . . . In these stories, we celebrate the depth and bounty of our culture, language, and history. This is the book I've needed my whole life."
—Michelle Molanzo, Buzzfeed, Great Books to Read this Fall

"Ramos chronicles how “Latinx” has given rise to a sense of collectivity and solidarity among Latinos unseen in this country for decades, asking the reader to expand their understanding of what it means to be Latino and what it means to be American."
—Fortune, 5 New Books to Read in October

“Ramos compels us to reconsider our understanding of what it means to belong. . . . Finding Latinx guides readers into a deeper understanding of who we are at our core and on the margins, nuanced identities that compose the great American mosaic.”
—Stacey Abrams

“Paola Ramos knows how to listen, how to put herself in someone else’s shoes, and how to be an ally. With this book, she affirms the power of our diversity and identity, helping us understand that ‘Latinx’ is a label we can all fit into.”
—Ilia Calderón, co-anchor of Univision News

“The story of the dynamism, beauty and power of a community that is transforming what it means to be American.”
—Ai-jen Poo, co-founder and Executive Director of the National Domestic Workers Alliance

"In her debut book, [Ramos] gives voice to a rapidly growing American demographic.... her passion is evident."
—Kirkus Reviews