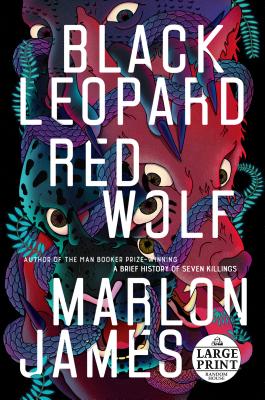 By Marlon James
$32.00
This book is out of stock indefinitely, unable to order at this time.

This is book number 1 in the The Dark Star Trilogy series.

One of the most unique, funnest novels I read this past year. The world Marlon James builds in this book is unlike anything you've ever read before, and he populates it with the most wonderfully idiosyncratic characters in a gender-bending, myth-making, madcap adventure story set in a fantastical African kingdom of yesteryear. Funny, fascinating, sexy (yes, he writes great sex scenes!), and riveting, I guarantee you'll have a great time with this one-of-a-kind book. And best of all, it's only the first in a series, and there should be at least two more to come!

“Marlon James’ Black Leopard, Red Wolf is a shot across the bow of fantasy literature: bold, fresh, and filled with brutal wonder and endless imagination. James’tale set in a fantastical ancient Africa follows a hunter known only as Tracker as he trails the scent of a lost boy, meeting a shape-shifting leopard along the way. At turns hallucinatory, dreamlike, and nightmarish, Black Leopard, Red Wolf’s world envelops the reader in its stink, grime, sweat, and blood. Never has a magical world felt quite so otherworldly and yet frighteningly tactile at the same time. This is literary fantasy as you’ve never encountered it before and a truly original tale of love, loss, power, and identity.”
— Caleb Masters, Bookmarks, Winston-Salem, NC

“Black Leopard, Red Wolf is an amazing epic that launches from a familiar framework of the fantasy genre. Lovingly crafted, it immediately steals you away from your world and steeps you in one of ancient yet familiar myth and magic. The language, the beasts, the people—James’ writing is both brutal and beautiful. You’ll get the journey you want from this fantasy, but it won’t be the same trip around the block. Rather, it’s a walk off the edge of the Earth. James’ talent shines and his passion in this book is clear. This is a book to be GEEKED about, and I absolutely am.”
— Olivia Valenza, Boswell Book Company, Milwaukee, WI

One of TIME’s 100 Best Fantasy Books of All Time

Finalist for the 2019 National Book Award

Named a Best Book of 2019 by The Wall Street Journal, TIME, NPR, GQ, Vogue, and The Washington Post

"A fantasy world as well-realized as anything Tolkien made." --Neil Gaiman

In the stunning first novel in Marlon James's Dark Star trilogy, myth, fantasy, and history come together to explore what happens when a mercenary is hired to find a missing child.

Tracker is known far and wide for his skills as a hunter: "He has a nose," people say. Engaged to track down a mysterious boy who disappeared three years earlier, Tracker breaks his own rule of always working alone when he finds himself part of a group that comes together to search for the boy. The band is a hodgepodge, full of unusual characters with secrets of their own, including a shape-shifting man-animal known as Leopard.

As Tracker follows the boy's scent--from one ancient city to another; into dense forests and across deep rivers--he and the band are set upon by creatures intent on destroying them. As he struggles to survive, Tracker starts to wonder: Who, really, is this boy? Why has he been missing for so long? Why do so many people want to keep Tracker from finding him? And perhaps the most important questions of all: Who is telling the truth, and who is lying?

Drawing from African history and mythology and his own rich imagination, Marlon James has written a novel unlike anything that's come before it: a saga of breathtaking adventure that's also an ambitious, involving read. Defying categorization and full of unforgettable characters, Black Leopard, Red Wolf is both surprising and profound as it explores the fundamentals of truth, the limits of power, and our need to understand them both.