Turkey and the Wolf: Flavor Trippin' in New Orleans [A Cookbook] (Hardcover) 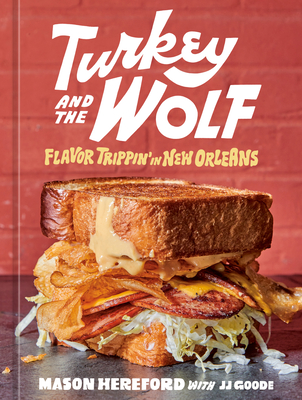 “Mason and his team are everything the culinary world needs right now. This book is a testimony of living life to the most and being your true self!”—Matty Matheson

Mason Hereford grew up in rural Virginia, where his formative meals came at modest country stores and his family’s holiday table. After moving to New Orleans and working in fine dining he opened Turkey and the Wolf, which featured his larger-than-life interpretations of down-home dishes and created a nationwide sensation.

Filled with recipes designed to get big flavor out of laidback cooking, Turkey and the Wolf is a wild ride through the South, with food so good you’re gonna need some brand-new jeans.

A native Virginian, Mason Hereford moved to New Orleans in 2008 and opened Turkey and the Wolf in 2016. Bon Appétit named it the best new restaurant in America. Food & Wine and GQ called it one of the most important restaurants of the decade, and Guy Fieri featured it on Diners, Drive-ins, and Dives.

“Turkey and the Wolf is a Triple-D joint that’s as funky and off the hook as any place I’ve been. As creative and delicious as it is fun, this book delivers on bringin’ their New Orleans energy home, and will keep ya howlin’ for more.”—Guy Fieri

“Welcome to the Turkey and the Wolf universe—the family, friends, food, and fun that make Mason Hereford’s restaurants so special. I’m as delighted by the photography and stories as I am to see all the recipes for the food I’ve enjoyed eating over the years.”—Nina Compton

“Southern food gets a kick in the pants in this exuberant and irreverent debut, a collection of high/low recipes from Hereford, whose buzzy New Orleans restaurant gives the book its title. . . . The recipes are blazing and the tone delightfully profane, making this perfect for anyone ready to check their pretensions and get a little messy.”—Publishers Weekly (starred review)