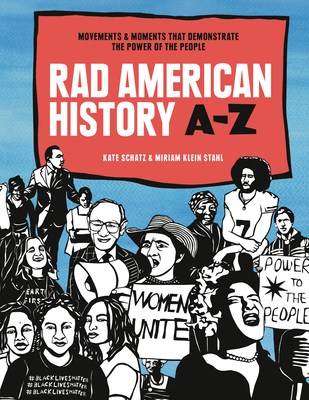 “An engaging, fascinating, and necessary book that speaks truth to power.”—Congresswoman Barbara Lee

In Rad American History A-Z, each letter of the alphabet tells the story of a significant moment in America's progressive history--one that isn't always covered in history classes: A is for Alcatraz, and the Native occupation of 1969; C is for the Combahee River Raid, a Civil War action planned in part by Union spy Harriet Tubman; Z is for Zuccotti Park, and the Occupy movement that briefly took over the world.

There are tales of triumph, resilience, creation, and hope. Each engaging, fact-filled narrative illustrates an eye-opening moment that shows us how we got to now--and what we need to know about our histories to create a just and sustainable future.

“I wish I’d had Rad American History A–Z when I was growing up; it’s a book I hope to read to my children one day. In such chaotic political times, this is a critical tool for young people to know how change happens, and to know that they, too, can make change happen. This book belongs on all library shelves as a transformative approach to history as we know it.”–Alicia Garza, cofounder of Black Lives Matter Global Network

Kate Schatz is a feminist writer, activist, and educator. With illustrator Miriam Klein Stahl, she is the author of the New York Times bestsellers Rad American Women A-Z and Rad Women Worldwide, as well as My Rad Life: A Journal and Rad Girls Can. Kate is the co-founder of Solidarity Sundays, a nationwide network of feminist activist groups, and she speaks often about politics, resistance, feminism, race, parenting, and more.

Miriam Klein Stahl is an artist, educator, and activist. In addition to her work in printmaking, drawing, sculpture, and paper-cut and public art, she is also the co-founder of the Arts and Humanities Academy at Berkeley High School, where she has taught since 1995.

“Rad American History A—Z is a book I wish I had when I was growing up—and it's a book I hope to read to my children one day. In such chaotic political times, Rad American History is a critical tool for young people to know how change happens—and to know that they too can make change happen. This book belongs on all library shelves and in history books as a transformative approach to history as we know it.”—Alicia Garza, founder of BlackFutures Lab and co-founder of Black Lives Matter

“Rad American History A–Z is an engaging, fascinating, and necessary book that speaks truth to power. I’ve been a fan of the series for a long time and I know this addition will be a gem for all who read it.”—Congresswoman Barbara Lee

“I love all of the RAD books written by these ladies, but I think Rad American History A–Z is especially important. It’s a deeply researched, well-written, and powerfully illustrated look at our country and the people who have fought to make it better. It opens the door on many important struggles in history to minds, young and not-so-young, who may be inspired to think about conflict, protest, and social change in a new way.”—Corin Tucker, lead singer of Sleater-Kinney

“As multifaceted as the nation itself, Rad American History A–Z is an alphabet’s worth of movements and moments that have shaped the United States, including many history-makers such as young people who are often marginalized or omitted from traditional textbooks. Kate Schatz’s lively, accessible text and Miriam Klein Stahl’s energetic original art combine in a clear-eyed yet hopeful view of our shared history as a living thing—something we are all still creating.”—Rebecca Stefoff, adapter of Howard Zinn’s A Young People’s History of the United States and James W. Loewen’s Lies My Teacher Told Me: Young Readers’ Edition

“Rad American History A–Z by Kate Schatz and Miriam Klein Stahl is a fabulous book! In telling the story of powerful moments in a people’s history of the United States, they fuse dynamic movements for social justice with labor history, iconic cultural innovations, landmark Supreme Court decisions, and feminist, anti-racist, and LGBT actions. With brilliant illustrations and clearly written stories of resistance, the book is an irresistible, joyous celebration of the power of the people.”—Bettina Aptheker, distinguished professor emerita of feminist studies at the University of California, Santa Cruz

“The lively writing and the complementary black-and-white illustrations make this an enticing read. . . . A concise and intriguing survey of the relentless fight for social change.”—Kirkus Reviews