About Face: The Odyssey of an American Warrior (Paperback) 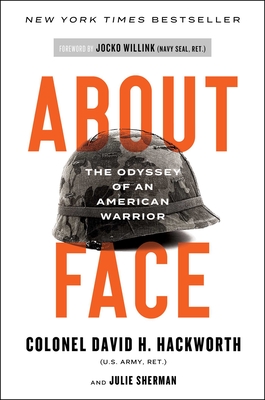 Called “everything a war memoir could possibly be” by The New York Times, this all-time classic of the military memoir genre now includes a new forward from bestselling author and retired Navy SEAL Jocko Willink.

Whether he was fifteen years old or forty, David Hackworth devoted his life to the US Army and quickly became a living legend. However, he appeared on TV in 1971 to decry the doomed war effort in Vietnam.

From Korea to Berlin and the Cuban missile crisis to Vietnam, Hackworth’s story is that of an exemplary patriot, played against the backdrop of the changing fortunes of America and the US military. This memoir is the stunning indictment of the Pentagon’s fundamental misunderstanding of the Vietnam conflict and of the bureaucracy of self-interest that fueled the war. With About Face, Hackworth has written what many Vietnam veterans have called the most important book of their generation and presents a vivid and powerful portrait of patriotism.

Colonel David H. Hackworth served in the military for twenty-five years and received 110 medals for his service. He is the author of About Face, Hazardous Duty, The Price of Honor, and Steel My Soldiers’ Hearts. He died in 2005.

Jocko Willink is author of Extreme Ownership, a decorated retired Navy SEAL officer, and cofounder of Echelon Front, where he is a leadership instructor, speaker, and executive coach. Jocko spent twenty years in the US Navy SEAL Teams, starting as an enlisted SEAL and rising through the ranks to become a SEAL officer. Jocko returned from Iraq to serve as Officer-in-Charge of training for all West Coast SEAL Teams. During his career, Jocko was awarded the Silver Star, the Bronze Star, and numerous other personal and unit awards. In 2010, Jocko retired from the Navy and launched Echelon Front where he teaches the leadership principles he learned on the battlefield. Jocko is also the author of the children’s book Way of the Warrior Kid and the New York Times bestseller Discipline Equals Freedom.