The Turnaway Study: Ten Years, a Thousand Women, and the Consequences of Having—or Being Denied—an Abortion (Paperback) 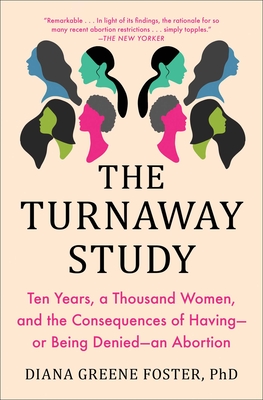 “If you read only one book about democracy, The Turnaway Study should be it. Why? Because without the power to make decisions about our own bodies, there is no democracy.” —Gloria Steinem

The “remarkable” (The New Yorker) landmark study of the consequences on women’s lives—emotional, physical, financial, professional, personal, and psychological—of receiving versus being denied an abortion that “should be required reading for every judge, member of Congress, and candidate for office—as well as anyone who hopes to better understand this complex and important issue” (Cecile Richards).

What happens when a woman seeking an abortion is turned away? To answer this question, Diana Greene Foster assembled a team of scientists—psychologists, epidemiologists, demographers, nurses, physicians, economists, sociologists, and public health researchers—to conduct a ten-year study. They followed a thousand women from across America, some of whom received abortions, some of whom were turned away. Now, for the first time, Dr. Foster presents the results of this landmark study in one extraordinary, groundbreaking book.

Judges, politicians, and pro-life advocates routinely defend their anti-abortion stance by claiming that abortion is physically risky and leads to depression and remorse. Dr. Foster’s data proves the opposite to be true. Foster documents the outcomes for women who received and were denied an abortion, analyzing the impact on their mental and physical health, their careers, their romantic relationships, and their other children, if they have them. Women who received an abortion were better off by almost every measure than women who did not, and five years after they receive an abortion, 99 percent of women do not regret it.

As the national debate around abortion intensifies, The Turnaway Study offers the first thorough, data-driven examination of the negative consequences for women who cannot get abortions and provides incontrovertible evidence to refute the claim that abortion harms women. Interwoven with the study findings are ten “engaging, in-depth” (Ms. Magazine) first-person narratives. Candid, intimate, and deeply revealing, they bring to life the women and the stories behind the science.

Revelatory, essential, and “particularly relevant now” (HuffPost), this is a must-read for anyone who cares about the impact of abortion and abortion restrictions on people’s lives.

Diana Greene Foster is a professor at the University of California, San Francisco (UCSF) in the Department of Obstetrics, Gynecology, and Reproductive Sciences and director of research at Advancing New Standards in Reproductive Health (ANSIRH). An internationally recognized expert on women’s experiences with contraception and abortion, she is the principal investigator of the Turnaway Study. She has a bachelor’s of science from the University of California, Berkeley, and a doctorate from Princeton University. She lives with her husband and two children in the San Francisco Bay Area.

"A remarkable piece of research.... The Turnaway Study will be understood, criticized, and used politically, however carefully conceived and painstakingly executed the research was. Given that inevitability, it’s worth underlining the most helpful political work that the study does. In light of its findings, the rationale for so many recent abortion restrictions—namely, that abortion is uniquely harmful to the people who choose it—simply topples."
—The New Yorker

"Foster’s findings are particularly relevant now, as the coronavirus pandemic, the economic downturn and ongoing efforts to restrict abortion access have made the procedure even more difficult for many to obtain."
—The Huffington Post

“The Turnaway Study provides definitive evidence that abortion access strongly enhances women’s health and well-being, whereas denying abortion results in physical and economic harm. Based on a ten-year investigation, the book combines engaging, in-depth stories of women who received and were denied abortion care along with study data from 50 peer-reviewed papers published in top medical and social science journals.”
—Ms. magazine

“Required reading for anyone concerned with reproductive justice."
—Kirkus, starred

“Dr. Foster brings what is too often missing from the public debate around abortion: science, data, and the real-life experiences of people from diverse backgrounds. Dr. Foster’s book offers the first in-depth look at the impact of being denied abortion on mental and physical health, economic wellbeing, relationships, and families. This should be required reading for every judge, member of Congress, and candidate for office — as well as anyone who hopes to better understand this complex and important issue.”
—Cecile Richards, co-founder of Supermajority, former president of Planned Parenthood, and author of Make Trouble