Blood in the Garden: The Flagrant History of the 1990s New York Knicks (Hardcover) 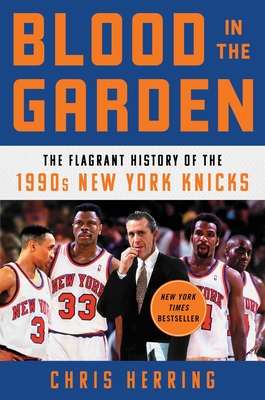 For nearly an entire generation, the New York Knicks have been a laughingstock franchise. Since 2001, they’ve spent more money, lost more games, and won fewer playoff series than any other NBA team.

But during the preceding era, the Big Apple had a club it was madly in love with—one that earned respect not only by winning, but through brute force. The Knicks were always looking for fights, often at the encouragement of Pat Riley. They fought opposing players. They fought each other. Hell, they even occasionally fought their own coaches.

The NBA didn’t take kindly to their fighting spirit. Within two years, league officials moved to alter several rules to stop New York from turning its basketball games into bloody mudwrestling matches. Nevertheless, as the 1990s progressed, the Knicks endeared themselves to millions of fans; not for how much they won, but for their colorful cast of characters and their hardworking mentality.

Now, through his original reporting and interviews with more than two hundred people, author Chris Herring delves into the origin, evolution, and eventual demise of the iconic club. He takes us inside the locker room, executive boardrooms, and onto the court for the key moments that lifted the club to new heights, and the ones that threatened to send everything crashing down in spectacular fashion.

Blood in the Garden is a portrait filled with eye-opening details that have never been shared before, revealing the full story of the franchise in the midst of the NBA’s golden era. And rest assured, no punches will be pulled. Which is just how those rough-and-tumble Knicks would like it.

Chris Herring is a senior writer for Sports Illustrated. He previously spent five years covering the NBA for ESPN and FiveThirtyEight, and prior to that spent seven years at The Wall Street Journal, where he covered the New York Knicks. He lives in Chicago and teaches at Northwestern’s Medill School of Journalism in his spare time. You can follow him on Twitter @Herring_NBA.

“Readers need not love the Knicks—or even possess deep knowledge of professional basketball—to enjoy this book. It throbs with an insider’s perspective…besides the vivid writing, what makes Blood in the Garden so successful is the depth of Mr. Herring’s research, which rests on more than 200 extensive interviews.”—The Wall Street Journal

“Armed with behind-the-scenes knowledge culled from more than 200 interviews with players, coaches, and executives, Herring delivers a thrilling narrative that skillfully evokes the intensity and tension of pro basketball. Hoops fans will relish this riveting ride.”—Publishers Weekly, Starred Review

“It takes a special writer to capture the genius of a hard-nosed, sucker-punching, underachieving franchise that broke as many hearts as it did bones. Chris Herring is as dogged, as brilliant as they come. He has delivered an instant classic with Blood in the Garden. With spectacular detail and rigorous reporting, Herring unearths new information on some of the most complex, most troubling, and most fascinating personalities in NBA history.”—Mirin Fader, New York Times bestselling author of Giannis: The Improbable Rise of an NBA MVP

"The depth of Herring's reporting is remarkable, leading to a mix of behind-the-scenes stories and hard-core hoops talk that will be catnip to any NBA fan. We get new information on everything from the O.J. Simpson chase to those infamous Heat-Knicks brawls. The 1990s Knicks are an iconic team, and Herring's chronicle of that time is a must-have."—Zach Lowe, NBA Senior Writer, ESPN

"The thing that's great about this book is what’s been great about Chris Herring's writing for years: he puts you so far into the story that it feels less like you're just reading something and more like you're experiencing it. Halfway through Blood in the Garden, all I wanted to do was go to the park and start flagrant fouling people on the court."—Shea Serrano, New York Times bestselling author of Basketball (And Other Things)

“With one jaw-dropping anecdote after another, Chris Herring presents the book that relentless Knicks team — and the long-suffering Knicks fanbase — deserves.”—Alan Sepinwall, New York Times bestselling co-author of The Sopranos Sessions

"Chris Herring's reporting and details make Blood in the Garden fascinating and incredibly easy to read. His digging and storytelling gives one of the more mythical—and perhaps underappreciated—teams from the 1990s a proper treatment with an inside look worthy of our social media, 'give-us-all-the-tea' age."—Marcus Thompson, New York Times bestselling author of Golden: The Miraculous Rise of Steph Curry