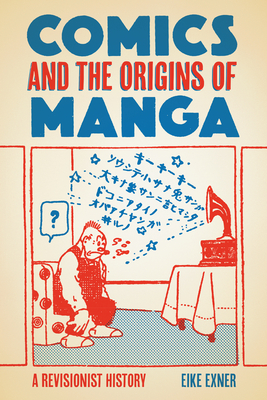 By Eike Exner
$69.95
Not Yet Published - Other Formats May Be Available

Japanese comics, commonly known as manga, are a global sensation. Critics, scholars, and everyday readers have often viewed this artform through an Orientalist framework, treating manga as the exotic antithesis to American and European comics. In reality, the history of manga is deeply intertwined with Japan’s avid importation of Western technology and popular culture in the early twentieth century.

Comics and the Origins of Manga reveals how popular U.S. comics characters like Jiggs and Maggie, the Katzenjammer Kids, Felix the Cat, and Popeye achieved immense fame in Japan during the 1920s and 1930s. Modern comics had earlier developed in the United States in response to new technologies like motion pictures and sound recording, which revolutionized visual storytelling by prompting the invention of devices like speed lines and speech balloons. As audiovisual entertainment like movies and record players spread through Japan, comics followed suit. Their immediate popularity quickly encouraged Japanese editors and cartoonists to enthusiastically embrace the foreign medium and make it their own, paving the way for manga as we know it today.

By challenging the conventional wisdom that manga evolved from centuries of prior Japanese art and explaining why manga and other comics around the world share the same origin story, Comics and the Origins of Manga offers a new understanding of this increasingly influential art form.

EIKE EXNER is an independent scholar who has taught at the University of Southern California in Los Angeles and Josai International University in Tokyo. His research has appeared in the International Journal of Comic Art, ImageTexT, and The Comics World, and he has received the John A. Lent Award in Comics Studies.

"Through subtle formal analysis and groundbreaking archival research, Comics and the Origins of Manga makes a compelling argument for the strong influence of translated American comics on the development of modern Japanese manga.”
— Henry Jenkins

“...a compelling investigation of an historical 'audio-visual' dialogue between the 'sound images' of comics and manga...this text becomes a meaningful revelation of the unique and multifarious histories of world print and comic cultures.”
— Frenchy Lunning

“Eike Exner has meticulously researched voluminous archival materials transnationally, analyzed them critically and carefully, and, in the process, challenged, contradicted, and corrected the history of manga’s origins. Without any reservation, a history-altering masterpiece!”
— John A. Lent

"This is an excellent book that I enjoyed reading immensely. The topic is timely and important and the scholarship is meticulous and comprehensive."
— Gennifer Weisenfeld

“Modern Japanese comics, or 'manga,' have enjoyed huge success around the world in the last three decades. So much so that today some fans occasionally seem to think manga—perhaps even all comics—are really a purely Japanese invention. Of course, nothing could be further from the truth. In his book, using primary sources from inside and outside Japan, Eike Exner does a wonderful job of cutting through both mist and myths and showing us another reality."
— Frederik L. Schodt