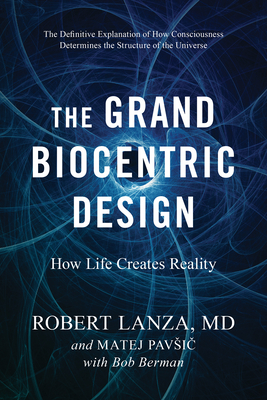 The theory that blew your mind in Biocentrism and Beyond Biocentrism is back, with brand-new research revealing the startling truth about our existence.

What is consciousness? Why are we here? Where did it all come from—the laws of nature, the stars, the universe? Humans have been asking these questions forever, but science hasn't succeeded in providing many answers—until now. In The Grand Biocentric Design, Robert Lanza, one of Time Magazine's "100 Most Influential People," is joined by theoretical physicist Matej Pavšic and astronomer Bob Berman to shed light on the big picture that has long eluded philosophers and scientists alike.

This engaging, mind-stretching exposition of how the history of physics has led us to Biocentrism—the idea that life creates reality-takes readers on a step-by-step adventure into the great science breakthroughs of the past centuries, from Newton to the weirdness of quantum theory, culminating in recent revelations that will challenge everything you think you know about our role in the universe.

​This book offers the most complete explanation of the science behind Biocentrism to date, delving into the origins of the memorable principles introduced in previous books in this series, as well as introducing new principles that complete the theory. The authors dive deep into topics including consciousness, time, and the evidence that our observations-or even knowledge in our minds-can affect how physical objects behave.

The Grand Biocentric Design is a one-of-a-kind, groundbreaking explanation of how the universe works, and an exploration of the science behind the astounding fact that time, space, and reality itself, all ultimately depend upon us.

Robert Lanza, MD is one of the most respected scientists in the world-a U.S. News & World Report cover story called him a "genius" and "renegade thinker," even likening him to Einstein. Lanza is head of Astellas Global Regenerative Medicine, Chief Scientific Officer of the Astellas Institute for Regenerative Medicine, and adjunct professor at Wake Forest University School of Medicine. He was recognized by TIME magazine in 2014 on its list of the "100 Most Influential People in the World." Prospect magazine named him one of the Top 50 "World Thinkers" in 2015. He is credited with several hundred publications and inventions, and more than 30 scientific books, including the definitive references in the field of stem cells and regenerative medicine. A former Fulbright Scholar, he studied with polio pioneer Jonas Salk and Nobel Laureates Gerald Edelman and Rodney Porter. He also worked closely (and coauthored a series of papers) with noted Harvard psychologist B. F. Skinner and heart transplant pioneer Christiaan Barnard. Dr. Lanza received his undergraduate and medical degrees from the University of Pennsylvania, where he was both a University Scholar and Benjamin Franklin Scholar. Lanza was part of the team that cloned the world's first human embryo, as well as the first to successfully generate stem cells from adults using somatic-cell nuclear transfer (therapeutic cloning). In 2001 he was also the first to clone an endangered species, and recently published the first-ever report of pluripotent stem cell use in humans.

Matej Pavšic is a physicist interested in foundations of theoretical physics. During his more than 40 years of research at the Jozef Stefan Institute in Ljubljana, Slovenia, he often investigated the subjects that were not currently of wide interest, but later became hot topics. For example, in the 70s he studied higher dimensional, Kaluza-Klein theories, and in the 80s he proposed an early version of the braneworld scenario that was published, among others, in Classical and Quantum Gravity. Altogether, Pavsic has published more than one hundred scientific papers and the book The Landscape of Theoretical Physics: A Global View. He is among the pioneering authors in topics such as mirror particles, braneworld, and Clifford space, and has recently published important works explaining why negative energies in higher derivative theories are not problematic, which is crucial for quantum gravity. Pavsic studied physics at the University of Ljubljana. After obtaining his master's degree in 1975, he spent a year at the Institute of Theoretical Physics in Catania, Italy, where he collaborated with Erasmo Recami and Piero Caldirola. Under their supervision he completed his PhD thesis which he later defended at the University of Ljubljana. Pavsic has participated at many conferences as an invited speaker and regularly visited the International Centre for Theoretical Physics (ICTP) in Trieste.

Bob Berman is the longtime science editor of the Old Farmer's Almanac, and contributing editor of Astronomy magazine, formerly with Discover from 1989 to 2006. He produces and narrates the weekly Strange Universe segment on WAMC Northeast Public Radio, heard in eight states, and has been a guest on such TV shows as Late Night with David Letterman. He taught physics and astronomy at New York's Marymount College in the 1990s and is the author of eight popular books. His newest is Zoom: How Everything Moves (2014, Little Brown).

"For those addicted to exploring our role as observers in defining our universe, here is your long-awaited major update . . . You'll love The Grand Biocentric Design―it adds new turf to the physics of making universes, and includes ‘solid evidence,' at last, that observers define the structure of physical reality itself."

"The Grand Biocentric Design brilliantly draws our attention to the most important feature of the entire universe: our human minds . . . This new book brings out the real nature of our universe: for all of us to deeply search for fuller understanding, and for meaning."

"For those searching for answers to contemporary physics' disturbing findings, The Grand Biocentric Design is a must-read."

"In The Grand Biocentric Design, his third and best book on the topic, Lanza and colleagues unpack, with unprecedented rigor, his theory of biocentrism through the hard lens of physics . . . If you consider biocentrism mere philosophy, look to this volume to make the case that science is at its core."

"In his two previous books on biocentrism (written with Bob Berman), biologist Robert Lanza proposed a bold new theory of the universe, one that builds on the insights of quantum physics to put consciousness at its center. Here, with theoretical physicist Matej Pavšič, Lanza strives, in language suited to the general reader, to explain the science behind this theory."

—Robert Wilson, editor in chief at The American Scholar, the venerable magazine of Phi Beta Kappa, which has published the work of Albert Einstein, John Updike, Saul Bellow, Bertrand Russell, Margaret Mead, and Robert Frost, among others

"This must-read book is a masterpiece, discussing newly emergent research that answers questions, through the lens of biocentrism, on how the world works and who we are . . . It will provide thought-provoking and life-changing insights on your existence and everything that surrounds you."

—Anthony Atala, W. Boyce Professor and chairman, and director of the Institute for Regenerative Medicine at Wake Forest University, and member of the National Academy of Medicine, National Academies of Sciences, Engineering, and Medicine

"Robert Lanza is one of the most creative and brilliant scientists I have ever known . . . The Grand Biocentric Design is his latest creative work based on his life-long scientific journey, which opens up a new biology-based vista to our understanding of existence and consciousness."

—Kwang-Soo Kim, professor of psychiatry and neuroscience at Harvard Medical School, and director of the Molecular Neurobiology Laboratory, McLean Hospital

"A unique and paradigm-shattering concept that biological systems are primary and affect our perception of physical systems . . . This insightful work is certain to energize our conversations about the nature of the biological and physical world."

"A masterly tour de force that will change your life. Robert Lanza and his coauthors take on the Herculean task of reconciling quantum theory, relativity, and consciousness. You will never look at science—indeed, life and death—the same way again."