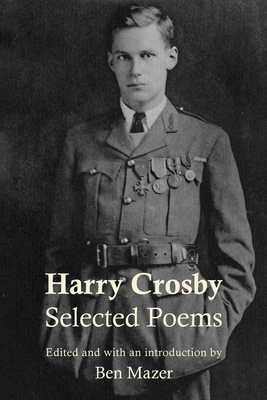 By Harry Crosby, Ben Mazer (Editor)
$21.95
Not On Our Shelves - Available to Order

Born into a wealthy Boston banking family, the nephew of J. P. Morgan, Harry Crosby was the very embodiment of flaming youth in the Roaring Twenties. A recipient of the Croix de Guerre for heroism in the American Ambulance Corps in World War One, he sustained trauma that fueled his extravagant and restlessly experimental expatriate lifestyle with his wife Caresse in Paris, before taking his life and that of his mistress in a notorious double suicide in a New York City hotel room in 1929. The Crosbys' Black Sun Press was famed for its elegantly designed limited editions, publishing first editions of important works of modernism, including Hart Crane's The Bridge, and the first excerpts of Joyce's Work-In-Progress to appear in book form. Crosby's own poetry has been little seen since its original publication in books by the Black Sun Press, the last of which appeared in 1931. Now acclaimed editor and poet Ben Mazer has brought together all of Crosby's contemporary magazine and anthology appearances, as well as drawing on poems from five of Crosby's collections, to present the first authorized edition of Crosby's poems to appear in book form since 1931.