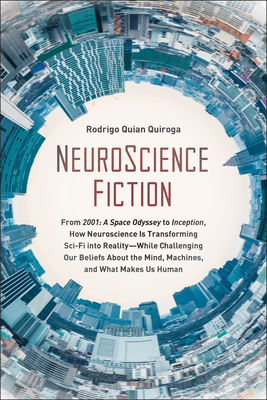 By Rodrigo Quian Quiroga
$17.95
Not On Our Shelves - Available to Order

What if science fiction stopped being fiction?

Developments in neuroscience are turning sci-fi scenarios into reality, and causing us to revisit some of the philosophical questions we have been asking ourselves for centuries.

Science fiction often takes its inspiration from the latest science . . . and our oldest questions. After all, the two are inextricably linked. At a time when advances in artificial intelligence are genuinely leading us closer to a computer that thinks like a human, we can't help but wonder: What makes a person a person?

Countless writers and filmmakers have created futuristic scenarios to explore this issue and others like it. But these scenarios may not be so futuristic after all.

In the movie Inception, a group of conspirators implants false memories; in Until the End of the World, a mad scientist is able to read dreams; in 2001: A Space Odyssey, a supercomputer feels and thinks like a person. And in recent years, the achievements described in leading scientific journals have included some that might sound familiar: implanting memories using optogenetics, reading the mind during sleep thanks to advanced decoding algorithms, and creating a computer that uses deep neural networks to surpass the abilities of human thought.

In NeuroScience Fiction, neuroscientist and author Rodrigo Quiroga reveals the futuristic present we are living in, showing how the far-out premises of 10 seminal science fiction movies are being made possible by discoveries happening right now, on the cutting edge of neuroscience. He also explores the thorny philosophical problems raised as a result, diving into Minority Report and free will, The Matrix and the illusion of reality, Blade Runner and android emotion, and more.

A heady mix of science fiction, neuroscience, and philosophy, NeuroScience Fiction takes us from Vanilla Sky to neural research labs, and from Planet of the Apes to what makes us human. This is a book you'll be thinking about long after the last page--and once you've read it, you'll never watch a sci-fi blockbuster the same way again.

Rodrigo Quian Quiroga holds a Research Chair at the University of Leicester, UK. He is the director of the Centre for Systems Neuroscience and the Head of Bioengineering at the University of Leicester. He graduated in Physics at the University of Buenos Aires, Argentina and obtained his PhD in Applied Mathematics at the University of Luebeck, Germany. Before joining the University of Leicester in 2004, he was a post-doctoral fellow at the Research Center Juelich, Germany, a Sloan fellow at the California Institute of Technology, USA and had short stays at RIKEN, Japan and the University of Nijmegen, The Netherlands. He has held visiting positions at the Leibniz Institute for Neurobiology in Magdeburg, the International School for Advanced Studies (SISSA) in Trieste, Italy, the University of California Los Angeles, the California Institute of Technology, the University of Buenos Aires, and CONICET. He obtained a young investigator award by the American Epilepsy Society, in 2010 a Royal Society Wolfson Research Merit Award and in 2014 he was selected as one of the 10 UK RISE Leaders in Science and Engineering. His main research interest is on the study of the principles of visual perception and memory. He discovered what has been named "Concept cells" or "Jennifer Aniston neurons", neurons in the human brain that play a key role in memory formation, a finding that was selected as one of the top 100 scientific stories of 2005 by Discover Magazine. His work has been published in about 100 research articles and has received world-wide media attention, including articles in The New York Times, The Washington Post, Scientific American, New Scientist, The Independent, and others. He is also the author of Borges and Memory, linking the thoughts of Argentinean writer Jorge Luis Borges with memory research in Neuroscience.