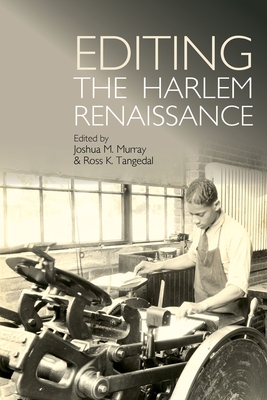 In his introduction to the foundational 1925 text The New Negro, Alain Locke described the Old Negro as a creature of moral debate and historical controversy, necessitating a metamorphosis into a literary art that embraced modernism and left sentimentalism behind. This was the underlying
theoretical background that contributed to the flowering of African American culture and art that would come to be called the Harlem Renaissance. While the popular period has received much scholarly attention, the significance of editors and editing in the Harlem Renaissance remains woefully
understudied. Editing the Harlem Renaissance foregrounds an in-depth, exhaustive approach to relevant editing and editorial issues, exploring not only those figures of the Harlem Renaissance who edited in professional capacities, but also those authors who employed editorial practices during the
writing process and those texts that have been discovered and/or edited by others in the decades following the Harlem Renaissance. Editing the Harlem Renaissance considers developmental editing, textual self-fashioning, textual editing, documentary editing, and bibliography. Chapters utilize
methodologies of authorial intention, copy-text, manuscript transcription, critical edition building, and anthology creation. Together, these chapters provide readers with a new way of viewing the artistic production of one of the United States' most important literary movements.

Joshua M. Murray is assistant professor of English and the pre-law and paralegal studies coordinator at Fayetteville State University. He specializes in African American literature with emphasis on the Harlem Renaissance, transnationalism, and autobiography & life writing. His work has beenpublished in MidAmerica, Teaching Hemingway and Race, Critical Insights: Harlem Renaissance, and Gale Researcher. He has forthcoming articles on Claude McKay's previously unpublished manuscript Romance in Marseille and Langston Hughes's use of the oceanic as critical idiom for African diasporickinship. He is currently developing a book manuscript that underscores the historical and literary significance of transnational liminality in the Harlem Renaissance. Ross K. Tangedal is assistant professor of English and director of the Cornerstone Press at the University of Wisconsin - Stevens Point. He specializes in American print culture and publishing studies, textual editing, and book history, with emphasis in Ernest Hemingway, F. Scott Fitzgerald, andmidwestern literature. His work has been published in South Atlantic Review, The Hemingway Review, The F. Scott Fitzgerald Review, Authorship, and others. He is a contributing editor for the NEH-funded Hemingway Letters Project (Cambridge UP) as well as associate editor for Volume 6 (forthcoming2021). In 2018, Hastings College Press published Tangedal's edition of John Herrmann's Foreign Born, a lost novel of the American home front during World War I.