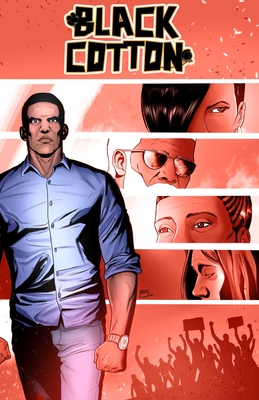 Black Cotton is an ongoing comic book series set in an alternate reality that revolves around an exorbitantly wealthy black family, the Cottons, created by Brian Hawkins and Patrick Foreman, Illustrated by Marco Perugini, and published by Scout Comics.

Set in an alternate reality where the social order of “white” and “black” is reversed, when it comes to social standing and class, the Cottons are at the top of the food chain, part of the One Percent, and are seemingly untouchable.  However, that all changes when Zion, their police officer son, who decided to not follow in the footsteps of his father and matriculate towards running the family business, is involved in the shooting of a minority white woman.  In a reality similar to our own, social tensions are already high, race is a hot topic, and the call for equality between white and black is aggressively being pursued.  Thus, Zion Cotton shooting Elizabeth Nightingale, a twenty-something college student on scholarship for track, ignites their city in a fury of protests and a call for action against racial injustice.  Led by the family’s patriarch, Elijah Cotton, and matriarch, Jaleesa Cotton, the Cottons are thrusted into the middle of a highly controversial predicament and immediately attempt to use their wealth, prestige, and power to remedy the problem. However, while the youngest Cotton, Xavier, a teenager, actively protests the social injustices with his friends, the middle child, Qia Cotton, the acting CCO of Black Cotton Ventures, a multi-billion dollar manufacturing conglomerate, does damage control for her wayward brother.  Ultimately, more division is created between both families as the Nightingales, unwilling to be assuaged, seek justice for Elizabeth, their daughter, who survived.

“Black Cotton is a comic, but it’s also a mindset that’s being explored in a comic.”

Multi-talented, Patrick D. Foreman, Co-Creator and writer of Black Cotton, is a 25 year retired Marine Corps Master Sergeant.  Hails from a small town, Hamburg AR, but raised in Virginia Beach VA.  He is Chief Operations Officer for the nationally known magazines, Returning Citizens & Positude, and an Award-winning Gospel Songwriter; recipient of the 2020 Independent Music Awards CCM/Gospel Song Winner for his song, "He's Able" featuring legendary vocalist David Scott.   Patrick believes in order for Change to truly occur that people have to be apart of the Change that they Seek.  This is clearly seen in his style of writing and the societal relevant topics he chooses to address.

Brian Hawkins is a freelance writer of comic books, novels,and scripts. Additionally, he is an editor for Mad Cave Studios, a freelance writer for BlackBox Comics and Zenescope Entertainment, and the author of  two children chapter books for North Star Editions Publishing. But most importantly, he is a Knower of Self, enjoys reading and binging shows with his wife, and loves splitting time between playing LOL Dolls with his two daughters and watching his son play video games.