On the Hierophant Road (Hardcover) 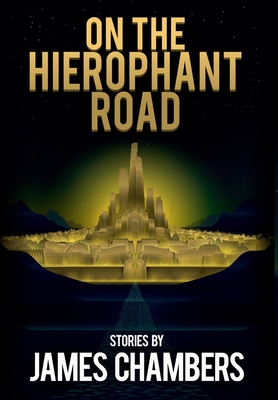 Far ahead down this strange and winding road await fourteen visions of alternate realities. Worlds of the distant past and the far future. Worlds where people forget they possess the power to fly, where artists' creations overtake their creators, and where the bond of human and machine defines existence. Worlds where magic changed history, reality runs fluid, and planets imprison terrible secrets. Worlds within worlds where technology makes people into ghosts who possess bodies, where refugees from another dimension shatter everyday life, and where answers to the mysteries of existence lie on the far side of an all-encompassing darkness.

From a forgotten sitcom about walruses to the truth behind an interplanetary war, from the steampunk streets of New Alexandria to an enigmatic flood world where people surrender themselves to things that live beneath the water, each of these stories marks a single stop....on the Hierophant Road. Featuring the all-new novella, "Long the Night and Low the Flame."

"Chambers enthralls with this disquieting and eclectic collection of bizarro tales which span the galaxy, the ages, and the human psyche, On the Hierophant Road reasserting his role as a veritable master of new pulp."

"...the work really sings when its weirdness is married to narrative tropes readers know well. Readers searching for something unexpected will find a lot to admire in this ambitious, inventive collection." -Library Journal

"These tales are united by their slightly askew proximity to reality with just enough detail to immerse readers in the well-built worlds and sympathetic protagonists, both of which drive each story. All are satisfyingly unsettling, with tones ranging from existential terror to an uneasy sense of awe. For fans of the new breed of dark-speculative-fiction writers who actively play with genre confines to create reads that are inventive, thought-provoking, and creepily fun..." -Booklist starred review, Becky Spratford