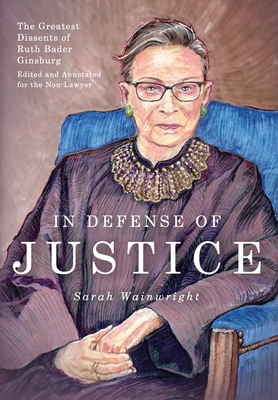 By Sarah Wainwright, Abigail Neff (Editor)
$24.99
Not On Our Shelves - Available to Order

This book features Ginsburg's best-known dissents in a format accessible to the non-lawyer, giving RBG's worldwide fans an approach to their hero's life's work. Each dissent is prefaced with an explanation of the case to help prepare the lay reader for approaching difficult legal prose.

Ginsburg is renowned for her feisty and fearless dissents, which are her arguments in opposition to the Court's majority opinion. Through this book, the reader will read Justice Ginsburg at the zenith of her passion as she fights to persuade the public and future generations of the Court's error. Through this book, we hope fans of Justice Ginsburg--especially the young--will gain better insight into the impact a single voice can have in the halls of our country's most powerful institutions.

From the introduction: Why does the practice of dissenting exist? Do dissents matter? Do they ever have lasting impact? Why do judges write dissents? Why, even, do judges write at all? Does the written opinion, and especially the written dissent, impart special impact to the words of the court or judge issuing it? And what do the answers to these questions tell us about Ruth Bader Ginsburg's role and legacy both as a justice and as the Court's most famous dissenter?

This book features Ginsburg's best-known dissents--formatted for the non-lawyer--and aims to show them within their proper context, both historically and in terms of how they reflect Ginsburg's life experience and jurisprudential philosophy.It is hard to pinpoint the commencement of Ginsburg's elevation from judge to hero for millions of idealistic Americans. Perhaps it was in 2015 with the publication of Notorious RBG: The Life and Times of Ruth Bader Ginsburg, a New York Times bestseller that chronicled Ginsburg's life in the informal argot of its self-described "#millennial" authors. Though surely the process began earlier than that, on June 25, 2013, with the first post (celebrating Ginsburg's dissent lamenting the Supreme Court majority's gutting of the Voting Rights Act) on a popular blog devoted to celebrating all things Ginsburg. Regardless, it is safe to say that by 2018, Ginsburg's status as a cultural icon was cemented. That year saw the release of two films about her--On the Basis of Sex, a biopic chronicling her years as a women's rights lawyer; and RBG, a documentary about her life.

What do millions of Americans see in her? She is, quite simply, the embodiment of nearly everything inspirational and aspirational about the better angels of the American experiment. Ginsburg is a gladiator. As a woman, she is one of the first of her kind. To the fight, she brings nothing but a pen. When the lions roar, she roars back, and with equal aplomb. She is ferocious. She is unafraid. Presented here are some of her most noble efforts. Although they are her last words in a losing battle, they have left an indelible mark up on the landscape of American jurisprudence.

"A dissent in a court of last resort is an appeal to the brooding spirit of law, to the intelligence of a future day when a later decision may possibly correct the error into which the dissenting judge believes the court to have been betrayed."--Charles Evans Hughes