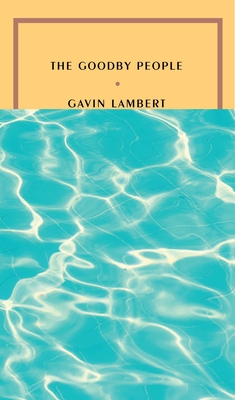 First published in 1971, The Goodby People is perhaps the greatest novel ever written about post-Manson, pre-Disney Los Angeles. "His elegant, stripped-down prose caught the last gasp of Old Hollywood in a way that has yet to be rivalled." (Armistead Maupin)

"The bisexual draft dodger living on the skids, the glamorous young widow in search of enlightenment, the skinny gamine from out of town who wants to make it in the movies . . ."* These are the people who inhabit Gavin Lambert's mordant portrait of Southern California at the end of the 1960s: forever swapping addresses, lovers, and dreams. They live in extraordinary, suffocating wealth; or else flirting with a Mansonesque cult; or else in a fantasy where golden-age actresses make ghostly visitations to comment on their daily life. All that binds them together is their common sense of aimlessness--and the clear, judgment-free eye of a British author trying his best to be a friend to each.

Cool, incisive, yet essentially kind, and very much ahead of its time, The Goodby People unfolds "in the yawning chasm between real life in Los Angeles and the fantasies manufactured by its dominant business" (*Gary Indiana), and stands as Gavin Lambert's masterpiece.

Gavin Lambert (1924–2005) was a British screenwriter, biographer, and novelist. His first and only feature film as a director, Another Sky (1954), was praised by Luis Buñuel and Roberto Rossellini. An affair with Nicholas Ray brought Lambert to Hollywood, where he contributed to Ray’s films Bigger than Life and Bitter Victory. Lambert went on to adapt D. H. Lawrence (Sons and Lovers), Tennessee Williams (The Roman Spring of Mrs. Stone), and his own novel Inside Daisy Clover for the screen. In addition to his five novels, he published definitive biographies of Natalie Wood, Norma Shearer, and Lindsay Anderson, among other film-world royalty.

"Alive with a heightened sensitivity to scarcely articulable aspirations of the time, as if Lambert wrote it wearing some sci-fi-type helmet with tubes and wires that conveyed directly into his brain and pages the plasma of a culture turning from one thing into another, and the exhilarating, terrifying, beautiful, and pitiable weirdness of human life when it’s let off its leash. Like Nathanael West’s The Day of the Locust and the Bud Wiggins novels of Bruce Wagner, The Goodby People is irradiated by the inherently metaphorical properties of Los Angeles."
— Deborah Eisenberg

"Lambert has a keen eye for the absurdities baked into the stunted lives of the talent . . . At the heart of Lambert’s novel is a deep sense of stasis, of futility, of waiting for things to shift in some way or for someone to leave you behind. But this is itself a kind of fantasy. All cities, block by block, are a result of tangled social arrangements: disagreements, backroom deals, twisted plots, unanimous votes, concessions, mistakes, conspiracy theories, empty promises, urban legends, utopian ideals—a miasma of hard and soft violence."
— Sam Russek

"Decades before it was fashionable, Gavin Lambert expertly wove characters of every sexual stripe into his lustrous tapestries of Southern California life."

"In [Lambert's] stories there is the true tenderness of pity that is not patronizing, the patience of the trained observer that is never boredom. Most of all there is enormous skill: the author has the playwright's flair for taut, meaningful dialogue; the novelist's feeling for mood; the short-story writer's love of plot; and the good movie writer's capacity for deft characterization . . . Though [his] stories are mainly confined, geographically, to Hollywood, Santa Monica, Venice (Cal.) and other near-by points, their subject is human emotion seen through a perceptive eye and evaluated by a sensitive spirit."
— Murray Schumach

"In the sophisticated, elegiac style of Christopher Isherwood's The Berlin Stories . . . Lambert has respectfully, ironically, accurately looked at the place where so many movies have been made, so many lives transformed or destroyed, and endeavored to find the defining patterns beneath the facade."
— Carolyn See

"Lambert's characters are narcissistic, selfish and manipulative. They're forever changing their addresses and phone numbers, but can't decide who they're running from . . . The Goodby People is his dark glory, melancholic, becalmed and effortlessly resonant."
— Christopher Fowler

"One of the brightest, wittiest people I have ever known. I was never bored with him."
— Mart Crowley

"He neither sentimentalizes nor cries sour grapes. How I wish I had written [his] book!"
— Christopher Isherwood

"For bitchy, witty and perceptive high-class gossip about Hollywood, there was no better source than the critic, screenwriter, novelist and biographer Gavin Lambert."
— Ronald Bergen