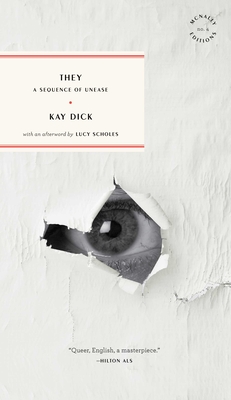 Set amid the rolling hills and the sandy shingle beaches of coastal Sussex, this disquieting novel depicts an England in which bland conformity is the terrifying order of the day. Violent gangs roam the country destroying art and culture and brutalizing those who resist the purge. As the menacing “They” creep ever closer, a loosely connected band of dissidents attempt to evade the chilling mobs, but it’s only a matter of time until their luck runs out.

Winner of the 1977 South-East Arts Literature Prize, Kay Dick’s They is an uncanny and prescient vision of a world hostile to beauty, emotion, and the individual.

Kay Dick (1915–2001) was the first female director of an English publishing house, promoted to the role at the age of twenty-six and mixing with what she described “a louche set” that included Ivy Compton-Burnett, Stevie Smith, and Muriel Spark. From the 1940s through the ’60s, she and her long-term partner, the novelist Kathleen Farrell, were at the heart of the London literary scene. She published seven novels, a study of the commedia dell’arte, and two volumes of literary interviews.

Lucy Scholes is a critic who lives in London, and is an editor at McNally Editions.

"[Kay Dick] is a writer who who respects human beings even in their pettiness or confusion; who regards each of them as a worthy object of study and even tenderness, and who devotes as much space and care to the description of what one might call a thoroughly trivial person as to a creature of heroic design.”

“The dream setting [of They] is cleverly handled, with its shifts of scene and time and its underlying air of menace.”
— Mary Sullivan

“Strong stuff, beautifully written, to make a man look behind him in fear and dread when walking down a leafy lane.”
— Philip Howard