Something to Do with Paying Attention (Paperback) 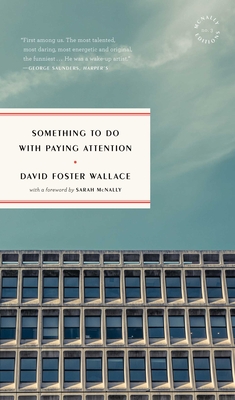 When David Foster Wallace died in 2008, he left behind a vast unfinished novel—some 1,100 pages of loose chapters, sketches, notes, and fragments—published in 2011 as The Pale King.

But the unfinished King did contain a finished novella that Wallace had already considered publishing as a stand-alone volume. It is the story of a young man, a self-described “wastoid,” adrift in the suburban Midwest of the 1970s, whose life is changed forever by an encounter with advanced tax law. It is, as Sarah McNally writes in her preface, “not just a complete story, but the best complete example we have of Wallace’s late style, where calm and poise replace the pyrotechnics of Infinite Jest and other early works.”

David Foster Wallace (1962–2008) was the author of two finished novels, The Broom of the System (1987) and Infinite Jest (1996), six collections of stories and essays, two book-length essays in mathematics and philosophy, and one unfinished novel, The Pale King, which was a finalist for the Pulitzer Prize.

“What [is] distinct in Wallace’s work is an attention to the secret, battered, deflated spiritual existence of America and Americans. Underneath the professional smiles there is a sadness in this country that is sunk so deep in the culture you can taste it in your morning Cheerios . . . Wallace identified it: many, many people followed him.”
— Zadie Smith

“Complete in itself . . . [Something to Do with Paying Attention] has to be the most unusual conversion experi- ence in confessional narrative.”

“Wallace was both satirist and preacher in the same breath, and the idea that the IRS, imagined as a quasi-religious foundation in which the burdensome and egotistic self might find redemption in the service of a greater good, could be both a comic conceit and a heartfelt belief seems to have been central to his conception of The Pale King.”
— Jonathan Raban

“It’s easy and seems obvious to say that Wallace the novelist was an ethicist, deeply concerned with fidelity to the truth. He didn’t flinch from plumbing the scariest, strangest, most difficult things right to the bottom: scenes of psy- chic torture, or right-to-life Christians facing an unwanted pregnancy, of suicide or murder, addiction or philosophy, the mathematics of Georg Cantor or the ethics of eating meat. In fact, though, his fiction is full of whoppers. I mean plain lies, as in, you can’t kill someone with ground glass (as in The Pale King) any more than you can use Lemon Pledge as sunscreen (as in Infinite Jest) . . . Why do this to us? It’s to make us do the ‘hard work,’ as he used to call it, of reading well. Through these cascades of weird little fibs, reality itself is over and over called into question. All of it. Experience, reading, writing. Being.”
— Maria Bustillos